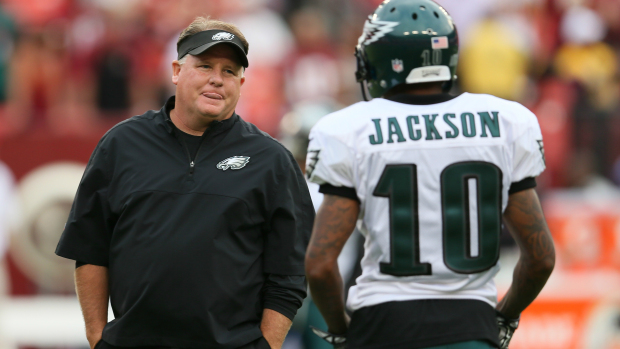 DELUSIONAL D-JAX: SHADY AND ME ON BETTER TEAMS THAN EAGLES!

But in avoiding comment on LeSean McCoy’s ridiculous comments about Eagles coach Chip Kelly and race, he wandered into Alice in Wonderland territy.

Asked to weigh in on McCoy’s comments about Kelly getting rid of all the good black players on the Eagles, Jackson demurred. But Jackson did have something interesting to say about leaving the Eagles.

Jackson suggested in an appearance on ESPN’s “SportsCenter” that he and McCoy have moved on from Philly and joined better teams in Washington and Buffalo.

“Honestly, I’m further along than that,” Jackson said. “It’s been two years since I’ve been removed from the Philadelphia Eagles. I’m just excited and happy where I’m at. I don’t really want to get too caught up in what’s going on over there in Philadelphia. LeSean McCoy is one of my great friends and he’s a great running back – he’s one of the best in the league – and I look at myself as one of the best receivers in the league. So as far as being removed from there, I can’t understand, why would you get rid of your best players on the team? But it’s their loss. Moving forward, the teams we’re with now is the teams that’s winning, the teams that’s gaining more of a respect of having them type of guys on the team.”

On its face, that statement sounds a little silly: Philadelphia went 10-6 last year. Washington went 4-12. Buffalo hasn’t won 10 games in a season since 1999.

Jackson does have a point, however, in one respect: He was the best player on the field in a win over the Eagles in December, a win that effectively ended the Eagles’ playoff hopes. Jackson was only on the winning side four times last year, but that was a very big win, and a very big statement that Kelly made a mistake when he got rid of him.