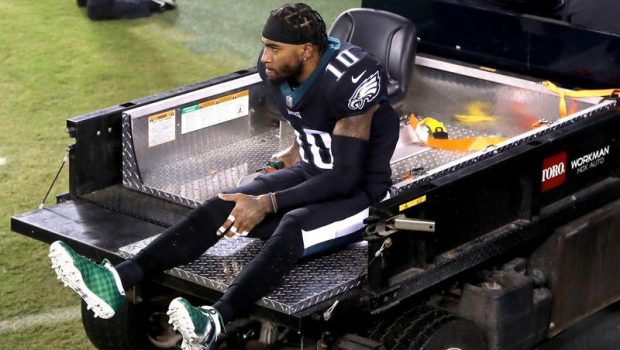 D-JAX RETURNED FOR EAGLES — AND ENDED IN A WALKING BOOT!

After the game, Jackson posted on Instagram a photo of his right foot in a walking boot, asking for prayers.

Jackson, 33, was back to return a punt with just over 2 minutes remaining in last night’s game. Giants defensive back Madre Harper picked Jackson up nearly off the ground and slammed him back on the field, trapping Jackson’s right leg underneath him.

Corey Ballentine was flagged on the play for lowering his head but the refs got the wrong guy.

Desean Jackson with a right leg injury on this play ?#FlyEaglesFly pic.twitter.com/wHnK5v1v85

After throwing his helmet in disgust, Jackson had to be helped to the sideline and was noticeably not putting weight on his right leg. After a brief trip into the blue medical tent, Jackson was carted into the locker room.

Jackson just came back from a hamstring injury that kept him out three games and he had three catches for 34 yards and opened the game with a 12-yard run.

“I don’t have any updates right now,” Eagles head coach Doug Pederson said after the game. “Probably get more tomorrow or at least through the weekend with some time off for the players this weekend. It’s really good to get those two guys back. DeSean was active in the game early and tried to continue to get him some touches as the game went on.

“And then Lane, having Lane back really, really — listen, he was in, he got knocked out for a play or two, came back and played really tough, as well. Both those guys, it was really a shot in the arm for the offense to get those two guys back.”