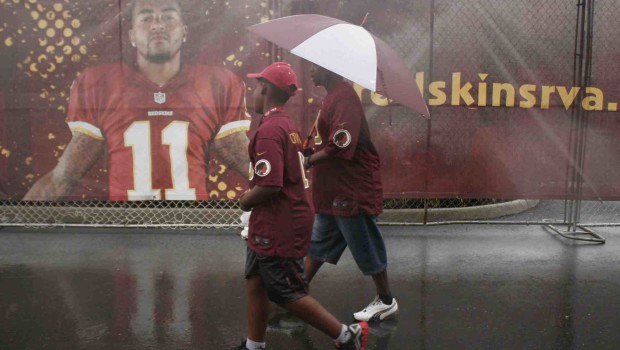 D-JAX PUTTING EAGLES IN REAR VIEW — TILL SEPT. 21 AT THE LINC

DeSean Jackson is all about the here and now.

Which means he is trying to put his six-year Eagles career and his unceremonious cutting in March in the rear view mirror.

“Honestly, I just look forward to being here,” Jackson told reporters as he began training camp along with his new Washington Redskins teammates on Thursday. “Thats the biggest thing I can say. I’m not really caught up in the past and what went on.”

Birds coach Chip Kelly released Jackson — who was coming off his most dominant season as a pro — in March, minutes after NJ.com published a story that detailed his troubles both on and off the field that concerned the Eagles front office.

“I don’t have anything negative to say about DeSean,” Redskins coach Jay Gruden said at a news conference Thursday. “I think he’s been a fine teammate. He’s been to all the OTAs (organized team activities). The only negative, I would say if I had one, is sometimes he looks too cool for school when he runs his routes, but he is running fast. We just have to keep working on him with his get-offs and make sure all his routes looks the same.

“Overall, he’s very coachable. I think he wants to be here and wants to do well.”

The Redskins’ offense — led by quarterback Robert Griffin III, who is coming off his second ACL surgery — sputtered at Bon Secours Washington Redskins Training Center in the team’s first practice of training camp Thursday morning. A downpour forced the team’s walkthrough in the afternoon to take place inside a nearby convention center.

Griffin said he wasn’t concerned about clicking with Jackson.

“Me and DeSean, I think our chemistry is there,” Griffin said. “One practice doesn’t tell you anything about chemistry. I know you guys don’t get to see us that often, but it was our first day back. We don’t use that as an excuse. But he knows if I miss him one time I’m going to get him the next and if he misses something then he’ll make that play for me. That chemistry’s there. He’s a dynamic football player and we look forward to him making dynamic plays. ”

Jackson said he’s fitting in well with his new squad.

“I think it was very important, to have relationship with some guys who were already here,” Jackson said. “It made things a lot easier. I look forward to bonding with each other and getting a rapport, which we already have.”

Jackson didn’t say Thursday he’d like to stick it to the Eagles for cutting him, although the Redskins are apparently content to take a jab at their NFC East divisional rivals. The Redskins put Jackson’s image on the ticket of the team’s home game against the Eagles on Dec. 20.

Jackson — who faces his old team in Philly in the Redskins’ third game of the regular season (Sept. 21) — was certainly more diplomatic.

“I look at it as a new opportunity, a new beginning,” Jackson said. “I really don’t get caught up in things in the past and things like that. Here, we have a lot of things we want to get going and get accomplished.”

As far as his goals this season, Jackson said he only had one: Doing his part to make the Redskins — who went 3-13 last season, which led to the firing of coach Mike Shanahan — a success.

“We just have to out there and win,” Jackson said. ” It’s a team sport. It’s a team game. Individually, you always set your stakes high, but if your team doesn’t do good, then so be it for yourself.

“There are going to be ups and downs that you have throughout the season. As long as the team is winning and the team is doing great, that’s all you can worry about.”