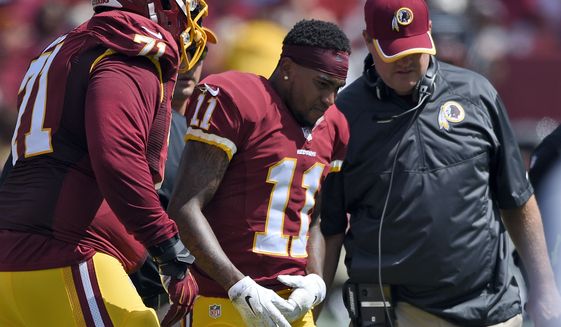 It is fine for DeSean Jackson to expound about how much he is looking forward to playing for the Redskins against the team that cut him, the Eagles, Sunday at the Linc, but actions do speak louder than his words.

He hasn’t practiced all week since suffering a shoulder sprain last Sunday, and unless he can play on a stationary bike — which has been his exercise of choice all week — don’t count on seeing him Sunday.

“We just have to wait and see,” coach Jay Gruden told reporters on Thursday. “Injuries, I try not to get too excited or too down on anything. I just let the injuries play out, let the player honestly let me know how he’s doing and then the trainer and just go from there, but for predicting injuries, I try not to do that. So, we’re just going to wait and see, and tomorrow will be a better gauge of where they are.”

Gruden said an effort will be made to get Jackson going on Friday.

“We’re going to challenge him, push him a little bit more tomorrow,” Gruden said. “And we’ll see where he’s at but he’s still a little sore, but I think he’s getting better and the range of motion is better. You know, it’s an injury where I think a couple more days will do him a lot of good.”

Or maybe it won’t. Maybe Gruden wants the Eagles to think they’ll see Jackson on Sunday, even though it was obvious the way he went down and then slumped off the field with his left arm drooping that he would miss his return to Philadelphia.