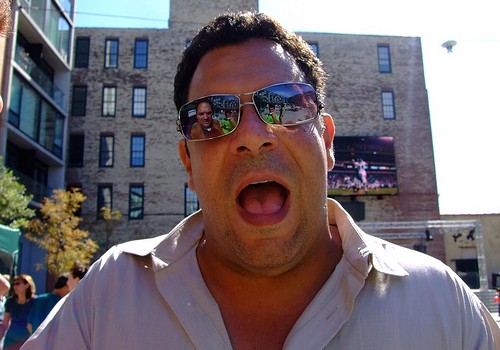 The Cuz is back!

And morning sports talk radio in Philly is about to feel an earthquake.

Anthony Gargano, aka the Cuz, who was one of the most popular talkers on 94WIP until he left in a contract dispute last December, is joining the competition, 97.5 The Fanatic next Monday, April 20.

And Angelo Cataldi, the longtime driver of the WIP morning clown car, better buckle up for the bumpy ride.

For the first time in 25 years on the air, radio sports jock Cataldi and WIP will be getting a direct, local competitor in the morning drive shift.

Matt Nahagian, program director for 97.5, could not be immediately reached for comment. In a February interview with the Philadelphia Business Journal, Nahigian admitted that a local morning show was something the station has discussed.

“I know this is a market that likes to hear local sports,” Nahigian said. “We’d like to have a local morning show but for now, Mike & Mike is one of the most popular shows nationally.”

Rumors of Gargano moving to The Fanatic and launching a challenge to WIP’s morning sports talk supremacy have been rampant since he left the station when his contract expired at the end of last year. He vacated his role as WIP’s afternoon drive-time host after 15 years with the station — rejecting a one-year extension offer that was less than the multiyear extensions signed by Cataldi and longtime co-host Al Morganti. He has been observing a 90-day non-compete clause that expired in late March and has made a few appearances The Fanatic this month.

Gargano, who worked at the New York Post before joining the Inquirer, has also written two books and co-wrote the screenplay to the 2009 film The Mighty Macs about the 1972 Immaculata College basketball team.

Since joining The Fanatic, which is owned by Greater Media, in 2006, Marks has worked his way up from intern, to producer to midday host. Now he gets a crack at the morning drive shift.

Marc Rayfield, president of CBS Radio’s six-station Philly operations, which includes WIP, said the station “is fortunate to have one of the single best morning shows in the history of Philadelphia radio, and it is doing better than ever. I like our odds.”

In discussing Gargano’s departure earlier this year, Rayfield described it as one of a series of tough decisions.

“We decided it was more important to our operations to keep Angelo than Anthony Gargano, so we did not aggressively pursue resigning Anthony.”

Cataldi, 64, just celebrated 25 years with WIP and said his most recent three-year contract could be his last. So this challenge comes at a time when WIP and its parent, CBS Radio, are no doubt thinking long term and making sure it is prepared to adequately replace its biggest money-maker or risk losing both listeners and advertisers.

One of Gargano’s loyal advertisers has been Bob Marino, now executive vice president of the Valley Green Bank division of Univest Bank & Trust Co. Gargano and Marino are childhood friends from South Philly.

“But I can tell you that wherever Anthony goes, we’ll be sure to follow,” Marino told the Business Journal.

The pending competition in the morning comes as WIP and The Fanatic are locking horns in the afternoon drive time. Gargano’s replacements at WIP, Tony Bruno and Josh Innes, are dueling with massive ratings leader Mike Missanelli.