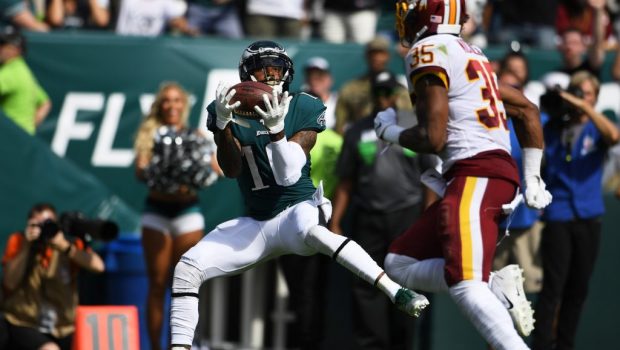 The Eagles are a mountain of bucks over the salary cap, which may be adjusted down to reflect the NFL’s diminished 2020 revenues because of the pandemic.

That will help, but in-over-his-head GM Howie Roseman has some tough choices to make.

Here’s an easy one:

Jackson has been a major disappointment since Roseman brought him back in 2019 after spending his first six years with the organization since heading to Washington. In 2020 he played in just five games, totaling 14 catches for 236 yards and one score.

In two years back with the Eagles he has just 23 catches combined in a total of eight games. His production has dropped off significantly, and more than that he can’t stay healthy.

Jackson spends more time injured than he does on the field, especially the past couple of seasons. The Eagles have decisions to make with not only Jackson and Alshon Jeffery, but also Zach Ertz, possibly extending Dallas Goedert, and most importantly finding a trade partner for Wentz to free up his huge contract.

There were rumors of a possible Wentz trade that involved the Chicago Bears, but nothing has come through yet and the Eagles are waiting for a big offer like the Detroit Lions got for Matthew Stafford.

The Eagles receiving group is among the worst in the league, and with a young quarterback in Hurts and a brand new head coach, revamping the offense seems necessary if this team wants to compete in 2021 and going forward.

They took Reagor in the first round of the 2020 NFL Draft, passing on Justin Jefferson, and Reagor missed time due to injury. Jeffery hasn’t done well in his time there and is another player in jeopardy of being cut entirely. Greg Ward finished the year with the third-most receiving yards behind Goedert and Fulgham, and Ward was a quarterback in college at the University of Houston.

Jackson turns 35 years old in December and just won’t last in the league for much longer, especially with a cap hit in double digits.

Jackson was one of the best receivers in the league for a long time and Eagles fans were ecstatic when he re-joined the team in Philly. Unfortunately, he hasn’t panned out, and after a mediocre year by this offense, a revamped receiver room is what they need.

Changes are coming in Philly after they got a new head coach and a lot of new faces on the staff, and with a departure of Wentz and others, this team should look really different when September rolls around.