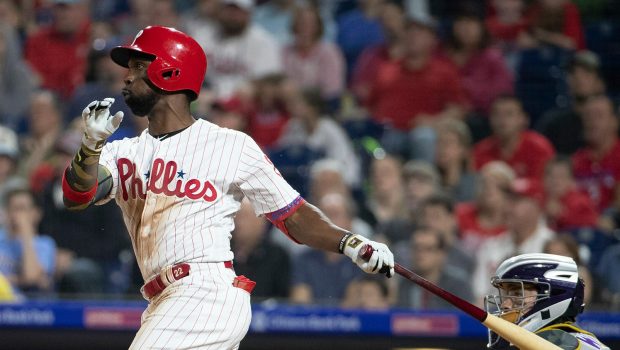 CUTCH IN THE CLUTCH AS PHILLIES SNAP 3-GAME LOSING STREAK!

Phillies manager Gabe Kapler praised McCutchen before the game after seeing him work on hitting slow curves hours before the first pitch.

McCutchen also drew two walks, and the leftfielder threw a runner out trying to score.

“I felt pretty good, made some adjustments,” McCutchen said. “I just try to stay in the zone and the hits will come.”

The former NL MVP is batting .242 with six homers but has a .371 on-base percentage as a leadoff hitter in his first season in Philly.

Irvin (2-0) gave up four runs — three earned — and five hits to win his second career start. Jose Alvarez and Pat Neshek each tossed a scoreless inning and Hector Neris finished for his sixth save in six tries.

“Jon worked awful hard in the third and fourth innings,” Rockies manager Bud Black said. “Some pitches on the edge could’ve changed the whole complexion of the game.”

Cesar Hernandez followed J.T. Realmuto’s two-out double with a double down the left-field line, giving the Phillies a 3-2 lead in the fourth.

Harper’s double made it 5-2 in the fifth. Gray retired the first two batters before walking MuCutchen and allowing a single to Jean Segura.

Carlos Estevez replaced Gray and surrendered Harper’s first RBI since he hit a grand slam on May 7. Harper had been 4 for 29 with 15 strikeouts before the hit. He heard boos after striking out in his first two at-bats.

“We’re always going to keep battling,” Harper said. “If one guy doesn’t get it done, another will.”

Desmond connected in the sixth to get the Rockies within a run but Philadelphia’s bullpen preserved the lead.

Irvin helped himself at the plate by drawing a 10-pitch walk in his first big-league at-bat with two outs in the third. His first start came at Kansas City. McCutchen followed with a blast out to left-center to tie it at 2-2.

“That was awesome,” Irvin said about fans rising for every pitch once he got to the sixth one. “A really cool, unique experience.”

Irvin committed two fielding errors in the second and the Rockies took a 1-0 lead on Brendan Rodgers’ fielder’s choice grounder.

“Cole had every opportunity to unravel in the second but he has poise,” Kapler said.

Charlie Blackmon led off the third with a double and scored on Mark Reynolds’ double to make it 2-0.