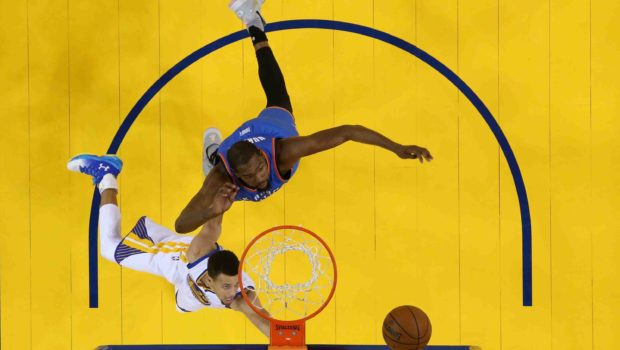 And then his NBA champion Golden State Warriors kept their winningest season in NBA history alive for at least one more game.

Curry scored 31 points, raising his arms in the early moments to fire up Golden State’s raucous crowd, and the Dubs staved off elimination with a 120-111 victory over the Thunder in game 5 of the Western Conference finals.

“We just did what we’re supposed to do. We’re supposed to win at home,” Curry said. “We know what we still have to do going forward. … We knew if we didn’t win we were going home. There’s no other motivation you need.”

For all the speculation about the current state of Curry’s beat-up body – that troublesome ankle, sore knee or tender elbow – he did it all.

“I thought he looked like 91 percent,” coach Steve Kerr cracked. “He came out and played a really good game. That’s all I can tell you. He’s going to compete every night. He had an excellent night and helped us get it done.”

Led by Curry, the Warriors looked like their old winning selves again.

The MVP made a snazzy layup late and dished out six assists, while Klay Thompson added 27 points as Golden State sent the best the best-of-seven series back to Oklahoma City for Game 6 on Saturday night. The Warriors trail 3-2 and are trying to become just the 10th team to rally from a 3-1 deficit.

“None of us want to go home,” Thompson said. “We’re having too much fun out there.”

The record-setting, 73-win Warriors, coming off their first back-to-back defeats all season, had been blown out in two losses at Oklahoma City by a combined 52 points.

“We have to take that game and travel,” Curry said of keeping momentum.

Durant’s 3-pointer with 4:34 left got the Thunder within 103-98, then Curry answered with a three-point play.

Curry scored seven points in a 58-second stretch of the second quarter and hit more big shots late, but the Thunder didn’t go away easily.

“I liked our will, I liked our fight,” Kerr said. “We were embarrassed in OKC the last couple games.”

Trailing 58-50 at halftime, Oklahoma City came out of the break with a 9-2 run. Westbrook’s 3-pointer with 6:06 left in the third put Oklahoma City ahead 68-67 for its first lead of the night. But Golden State led 81-77 going into the fourth and began the final period with an 8-0 burst.

“We didn’t shoot a particularly good percentage when we got into the lane and got into the deep paint,” Thunder coach Billy Donovan said. “We had our opportunities.”

Curry shot 9 for 20 and also had five steals, while Thompson had his 11th 20-point game for the second straight postseason despite shooting 2 for 9 from 3-point range. After struggling the past two games, Draymond Green had 11 points and 13 rebounds a day after receiving some encouraging words from Kobe Bryant on the phone.

“We really relied on the entire team tonight, which is when we’re at our best,” Curry said.

Kerr figured his Warriors might have an edge against the percentages of teams having trailed 3-1 because they’re the defending champs and were playing at home, where they have been nearly unbeatable.

He wasn’t surprised to see this team respond so well.

“We played with great desperation,” Kerr said. “I knew how we would play. This is a championship team.”

Kerr called for center Andrew Bogut to do more and the 7-footer delivered with a playoff career-high 15 points and 14 rebounds for his second double-double this postseason and seventh of his career.

Marreese Speights had a pair of three-point plays on follow shots and a 3 in the second quarter to give Golden State a nice lift off the bench. He had nine points in four minutes during that stretch and 14 points overall for his fifth double-digit scoring game this postseason.

“Their bench came in and made shots, made plays for them,” Durant said. “We know we’re going home. We can’t relax.”

With his 1,248th career postseason point in the third, Curry passed Wilt Chamberlain (1,246) for second place on the franchise’s playoff scoring list.

“That’s who he is, that’s what he’s done, and that’s what’s made him a very good player,” Donovan said.