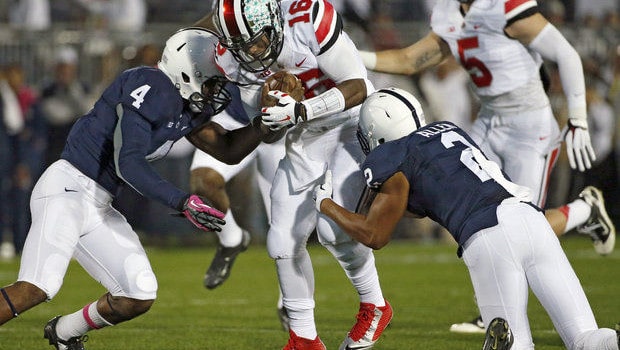 CUPCAKE SCHEDULE IS OVER: PENN STATE AT OHIO STATE TONIGHT!

Do five wins at home against so-so competition offset that season-opening clunker on the road against Temple?

The Lions have the look of an improved offense when talented freshman Saquon Barkley is healthy. But will he be ready, and at full strength, against the Buckeyes?

And the last time PSU’s offensive line faced a solid defensive front seven, it allowed 10 sacks in a 27-10 loss to the Owls in Philadelphia. Ohio State’s defense is more athletic than Temple’s and the Lions may be without center Angelo Mangiro.

The Lions made a game of it against Ohio State last season at home, extending the Buckeyes to overtime.

Temple is 5-0. The teams PSU beat? Just 12-16 overall. The Lions have beaten one program with a winning record (Indiana). The Army team that gave PSU a scare before losing 20-14 followed that up with a 44-3 loss against Duke.

Maybe you can make a case for PSU staying within two touchdowns.

That was the score of the last Ohio State-Penn State meeting in Columbus.