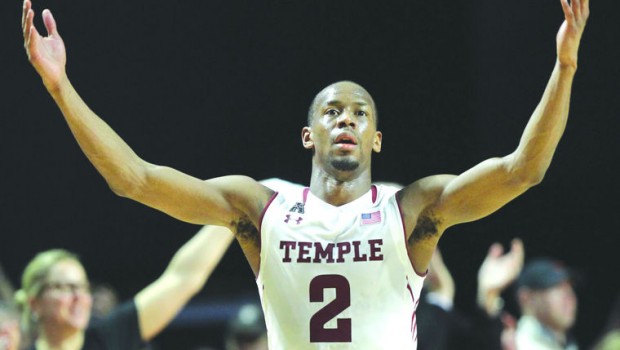 Temple got overlooked for the NCAA tournament, and Will Cummings (photo above) took it out on Bucknell last night at the Liacouris Center.

Cummings scored a season-high 30 points to lead the Owls past Bucknell 73-67 in the first round of the National Invitation Tournament.

Quenton DeCosey added 13 points, seven rebounds and five assists for the top-seeded Owls (24-10), the first team left out of the NCAA Tournament field.

After Hass gave the Bison a 52-51 lead with a 3-pointer midway through the second half, Cummings sparked an 11-3 Temple run with nine points in a 4 1-2- minute span.

Bucknell pulled within 64-62 on Hass’ jumper with 1:23 left, but Temple went 7 for 8 from the foul line in the final minute to advance to a second-round matchup vs. George Washington.

Cummings added seven rebounds. His 30 points were one off his career high and the most scored by an Owl this season.