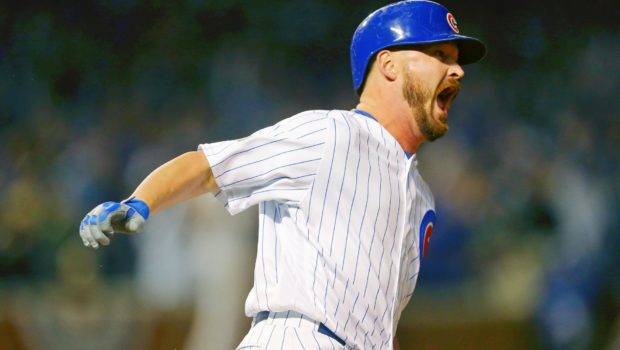 You know this must be the Chicago Cubs’ year when even their pitchers are getting into the hitting act!

Thanks to Kyle Hendricks and Travis Wood, Chicago is now one win away from advancing to the National League Championship Series for the second straight year.

Hendricks, the Major Leagues’ ERA leader, smacked a two-run single and Wood (above) added a solo home run to lift the Cubs to a 5-2 victory over the Giants on Saturday night in Game 2 of the NL Division Series at Wrigley Field.

*- If necessary | All times listed ET

“Now we go to San Francisco, and we’re going to play for one more win,” said Cubs closer Aroldis Chapman, who picked up his second save of the NLDS with a two-strikeout, 1-2-3 ninth inning.

The odds are against the Giants. Only seven times in 53 tries has a team gone down 0-2 in a Division Series and rallied to win. The glimmer of hope for San Francisco is that it has won each of its last nine elimination games, and it’s an even-numbered year for the 2010, ’12 and ’14 World Series champions. Game 3 of the best-of-five series will be played Monday night at AT&T Park, 9:30 ET/8:30 CT on FS1.

“It’s tough to lose two here, but it’s a case that we have been down this road before,” Giants manager Bruce Bochy said. “It’s never easy with us, so we’re hoping to get one here, but now we go home and you keep fighting. That’s all you can do.”

Hendricks matched his season RBI total, but he didn’t get the win, as he had to leave the game after taking a line drive by Angel Pagan off his right forearm with two outs in the fourth. The hit had an exit velocity of 94 mph, according toStatcast™. X-rays were negative.

“When it first hit me, I didn’t really feel it in the moment. I just tried to recover and make the play,” Hendricks said. “Once I started throwing off the mound, it just started tightening up on me. The X-rays were negative though, so hopefully it’s just a day-to-day thing. I’ll see how I feel over the next couple days.”

Wood replaced Hendricks, and in the bottom of the inning, crushed his 10th career home run to open a 5-2 lead. Cubs pitchers have driven in more runs (three) than the Giants (two) in the first two games of the series.

“It happened pretty quick. It always does in a situation like that,” Wood said. “As a bullpen guy, you’re always prepared, especially with Joe [Maddon], for any situation, anything that pops up, so you kind of keep your body and your mind locked into the game. So I was ready to come in. And then the at-bat, it was just I figured he was probably going to start me out with a cutter and I made a good swing on it and was fortunate enough to get him and hit it out of the park.”

San Francisco starter Jeff Samardzija also exited early, but for different reasons. The right-hander, who pitched for the Cubs from 2008-14, was knocked out after serving up four runs on six hits over two innings.

“It’s a great lineup,” Samardzija said of his former team. “I think they’re tops in most of the categories offensively in the league. You’ve just got to go out there and make your pitches. They’re not giving away any cheapies. They make you work for it, and we saw it tonight.”