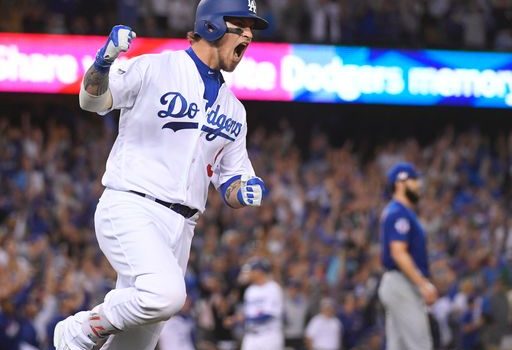 They’re getting nervous on the North Side of Chicago.

The Cubs were easily the best team in baseball during the 2016 regular season.

The Cubs, in first place all but one game this year, running away with the NL Central, slapping the San Francisco Giants around in the Division Series, find themselves in trouble for the first time all season.

The Cubs, suffering the indignity of back-to-back postseason shutouts for the first time in franchise history, lost 6-0, to the Los Angeles Dodgers last night, and suddenly find themselves trailing this best-of-seven National League Championship Series, 2-1.

It was the first time in the Dodgers’ glorious history, even with Hall of Famers Sandy Koufax and Don Drysdale on the same staff, they ever pitched back to-back postseason shutouts in their 200-game playoff history.

It’s a little tough to win a pennant, let alone a game, when you’re hitting .193 team this postseason, producing just six hits in the last 18 innings, with three of their everyday players hitting less than .100.

Things have gotten so desperate that Cubs manager Joe Maddon used Jason Heyward, who hit just .230 during the season, and .105 this postseason, to pinch-hit for All-Star shortstop Addison Russell. Heyward struck out. Russell went home with a .042 batting average.

“I think we’re trying too hard. We’re all trying to be heroes here. We need to have a better approach as a team.’’

Maybe, it was suggested, the Cubs still are too young, and don’t have enough postseason seasoning to thrive on the big stage?

“No, that’s not an excuse,’’ Montero said. “We have a young team, but we got experience. We’ve got guys in here that have been here at least two full years. We just do not have a good game plan.

“We’ve got to grow to get better, and that starts now.

“We’ve got to rejuvenate ourselves, maybe have a few drinks, and forget about it.’’

It was the only laughter heard in the Cubs’ clubhouse as players quietly shuffled through the clubhouse door, heading toward the team buses.

“Peaks and valleys in this game sometimes makes you go crazy,’’ said third baseman Kris Bryant, who had two of the four Cubs’ hits, “but we have more games. We have time to get that confidence back, figure things out, and I’m sure we will.’’

“No,’’ Bryant said. “It’s super calm. Nobody is throwing stuff. Sure, on the outside, you might want to think that’s what’s going on, but there is no panic. Not in here. It’s good.’’

“Belief is very powerful,’’ Bryant said, “and we have that here. We’re here for a reason. We’ve done it all year.’’

Still, the team that showed up in October bears little resemblance to the one that scored 808 runs during the season. They’ve scored nine of their 25 total runs in just two innings. Their outfield actually has been out-homered by their pitching staff, 2-1.

“There is really no excuse.

“We just have to pick it up quickly.’’

This is different than a year ago in the NLCS, the Cubs say, when they hit just .164 and scored eight runs during the New York Mets’ sweep. Nothing personal, Montero said, but this Dodgers’ pitching staff isn’t as talented as the one they faced in New York.

It’s one thing to get shut down by three-time Cy Young winner Clayton Kershaw, but quite another to have Rich Hill pitch six shutout innings. The last five times Hill has pitched, the Dodgers won only one game, and that was when he lasted 2 2/3 innings.

This night, Bryant went 2-for-3 off him during his six-inning stint. The rest of the Cubs went zero-for-17.

“We’ve got to go back to having fun,’’ Montero said. “If we had amnesia, tomorrow would be a great day, because you wouldn’t remember today.

“We’ve just got to go have fun, do what we’ve done all year, and forget this even happened.’’

Really, the Cubs know they just need to win one more game in Los Angeles, beating 20-year-old Julio Urias today or Kenta Maeda on Thursday. Just one victory assures they at least can go home, and they’ll take their chances at Wrigley Field.

The circumstances are not ideal. They know that Kershaw will start one more time. Who knows, maybe he starts Game 5, and comes out of the bullpen in Game 6 or Game 7?

Still, they’ve come too far, they insist, for their dream season to wind up on some cutting room floor.

“It’s a difficult moment to be in,’’ Maddon said, “and you have to fight through some pretty stringent adversity. But that’s how this thing works sometimes.

“It’s about putting this one in the wastebasket, come back, and play [Wednesday]. We’re able to win that game tomorrow, and the narrative’s going to change entirely.