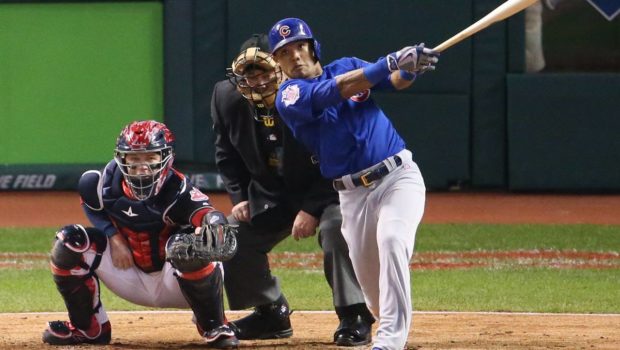 Are you ready for a Cubs-Indians Game 7!?

The Chicago Cubs again staved off elimination with an emphatic 9-3 victory over the Cleveland Indians last night, forcing a decisive Game 7 tonight in Cleveland.

The outcome will determine whether the Cubs, which haven’t won a Series since 1908, or the Indians, since 1948, will sink into the bleakness of winter doomed to live with the pain of missed opportunity.

“It’s every kid’s dream,” Indians reliever Andrew Miller said. “How many times have we all pretended we’re in a Game 7 of the World Series? And here we are.”

The Indians delivered their worst performance of the entire playoffs, hardly putting up a fight and squandering a chance to close out without do-or-die pressure. They set the tone by allow three crucial runs in the first inning, two from ineptitude.

Following singles by first baseman Anthony Rizzo and left fielder Ben Zobrist, disaster struck: Shortstop Addison Russell (above) hit a routine pop fly into right-center field. But, inexplicably, neither center fielder Tyler Naquin nor right fielder Lonnie Chisenhall called for it, and the ball dropped to the ground untouched for a two-run double.

“That was an unfortunate play, because we thought we were out of the inning,” Cleveland manager Terry Francona said.

Two innings later, Russell, an All-Star this year at age 22, blasted a grand slam of historic proportions, ensuring that the Cubs’ magical season would survive to another day.

It raised his RBI total for the game to six, matching three others—Bobby Richardson in 1960, Hideki Matsui in 2009 and Albert Pujols in 2011—for the most ever in a World Series game.

“We’ve been doing this all year, been breaking records, been putting in new history in history books,” Russell said.

In tonight’s Game 7, the Cubs will start Kyle Hendricks, who led the major leagues with a 2.13 ERA in the regular season. The Indians will hand their fate to ace Corey Kluber on short rest for the second time this series. He earned the wins in Games 1 and 4, giving up one run in 12 total innings. His ERA this postseason stands at 0.89.

But the Indians hope to gain an advantage in the bullpen. They didn’t use any of their top three relievers—Bryan Shaw, Miller or Cody Allen—on Tuesday, meaning Cleveland can ride them hard Wednesday.

The Cubs’ bullpen doesn’t appear quite as fresh. Maddon surprisingly summoned his closer, Aroldis Chapman, in the seventh inning, despite the Cubs’ five-run lead. Chapman wound up throwing 1 1/3 innings, after going 2 2/3 innings on Sunday.

“You always want to win the game,” Francona said. “But the next-best thing, and we’ve talked about this before we even started, was try to make them use pitching.”

The Cubs sounded unconcerned by Chapman’s workload. Maddon justified Chapman’s usage, saying he didn’t want to risk an Indians comeback, and noting that he threw just 20 pitches. Chapman said he “will be ready” to do “whatever they ask me to.”

Ultimately, if the Cubs can repeat their offensive barrage from Tuesday, it might not make a difference. Their bats heated up, with Bryant, Rizzo, Zobrist and Russell combining for 11 hits—a frightening thought for Cleveland.

Whatever the case, either the Cubs or Indians will accomplish something Wednesday that many of their fans have waited a lifetime to witness—a World Series championship.

“Of course we want to be the group that breaks the string,” Maddon said. “It’s just correct and apt that we’d go seven games.”