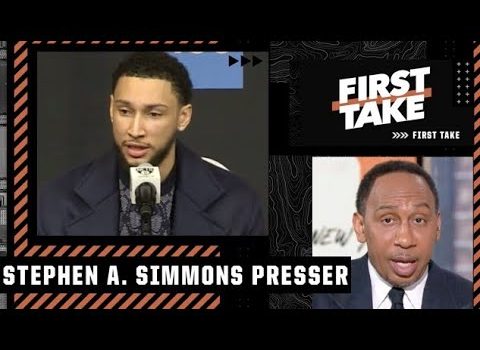 EVEN STEPHEN A SAYS SIMMONS’ MENTAL HEALTH CLAIM IS FAKE!

Nets guard Ben Simmons spoke publicly for the first time in more than eight months about his tumultuous exit from Philly.

Following the meeting with reporters, ESPN’s Stephen A. Smith claimed the three-time NBA All-Star came across “as an individual that simply was not telling the truth.”

“”Last night was your first game in Brooklyn since the trade which happened just three days earlier,” Smith said.

“And you were on the bench smiling up a storm. The world is beautiful, suddenly. These are all things that are inconsistent with a person, that according to the reports swore up and down they had mental health issues.”

Smith’s First Take co-host Molly Qerim quickly jumped in to note, “you can be dealing with mental health and you can be in a moment where you’re also smiling.”

“That’s true, and I’m not saying that it can’t,” Smith responded. “If he’s having those issues, we definitely are sensitive to it. The problem is, half the people don’t believe him.”

During his Tuesday press conference, Simmons was asked if he’s bothered by people who believe he’s “faking” mental health issues.

“No,” Simmons said. “Because I can’t tell somebody how they feel. I don’t know how they feel, what they are going through, how they process things. I’m not that person. It is what it is.”

Simmons, who has not stepped onto a basketball court this season, has been questioned in recent months because reports of his mental health issues didn’t become public until the 76ers began fining him for holding out last November.

He did reportedly see a sports psychologist in 2020 to assist with his shooting struggles. After those struggles appeared to get worse last season, Simmons fell out of favor with Philadelphia. The two seemed destined for a divorce, with the outcome reaching that resuly last week in a trade for James Harden.

Ben Simmons said his mental health had nothing to do with being traded from the Sixers. On joining the Nets:

"It's a blessing to be in an organization like this" pic.twitter.com/5b3A4Mnpw8