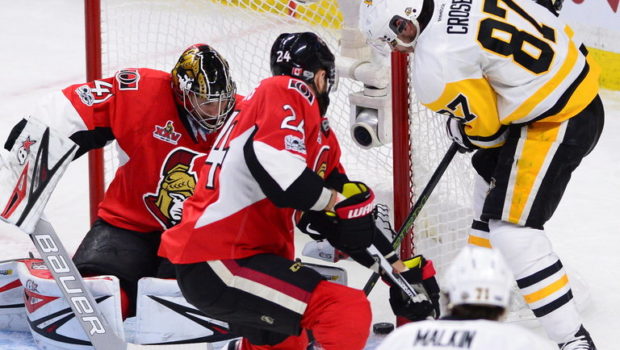 CROSBY IN THE CLUTCH! GOAL, ASSIST IN PENS’ 3-2 SERIES-TYING WIN!

Sidney Crosby had a goal and an assist, and the resurgent visiting Pittsburgh Penguins beat the Ottawa Senators 3-2 to even the Eastern Conference finals at two games apiece.

Crosby had only 1 point in the first three games of the series, leading to questions about his health after a jarring concussion in the second round.

Matt Murray made 22 saves in his first start of the playoffs after Marc-Andre Fleury was benched in the first period of the Penguins’ 5-1 loss in Game 3 on Wednesday. Brian Dumoulin and Olli Maatta added goals Friday to help Pittsburgh take a 3-0 lead midway through the second period.

Clarke MacArthur and Tom Pyatt scored for Ottawa. Game 5 is Sunday in Pittsburgh.

Starting for the first time in more than six weeks, Murray made a strong stop on Mike Hoffman less than two minutes into the game and denied Viktor Stalberg on two follow-up opportunities. Murray made maybe his best stop on a backhander by Derick Brassard, kicking the shot away with his right pad.

Pittsburgh opened the scoring with 46 seconds left in the first period when Maatta went down the left side and fired a short-side shot past on Anderson. Crosby set up the play.