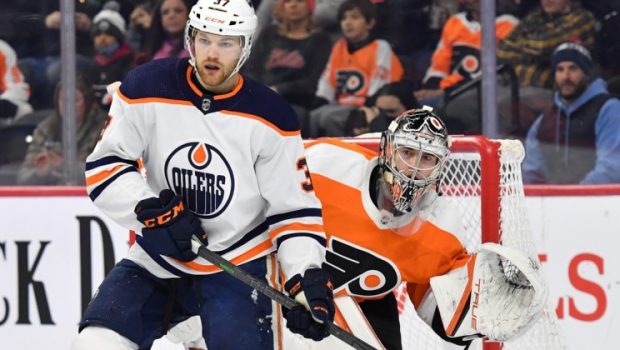 CRATERING FLYERS HAVE LOST 20 OF LAST 23 WITH NO END IN SIGHT!

Virtually every team that comes to the Wells is better than the Flyers, who are in last place in the Metro, 37 points behind first-place Carolina.

And last night was no different.

Draisaitl, who entered the game second in the league with 36 goals, didn’t register a shot in the Oilers’ 2-1 loss at Carolina on Sunday. He made up for that in Tuesday’s first period, notching his 37th with a wrist shot from long range on the power play that went high over Flyers goalie Carter Hart to give Edmonton a 1-0 lead with 2:19 left in the period.

McDavid recorded a secondary assist on the play, giving him 48 assists, and then scored an empty-netter with 1:40 to play for his 29th goal of the season.

Yamamoto increased the lead to 2-0 with 4:50 left in the second period when he poked home a rebound after a scramble in front.

The Flyers lost for the 20th time in the last 23 games while falling to 9-19 at home. The Flyers dropped to 1-4 during a franchise-record eight-game homestand and were shut out for the fifth time. Hart made 29 saves.

“We didn’t have the A-plus execution, that’s for sure,” interim coach Mike Yeo said.

The Flyers entered averaging 2.5 goals per game, which was fourth-fewest in the league, and its goal differential stands at minus-52 (131-183) after Tuesday’s loss.