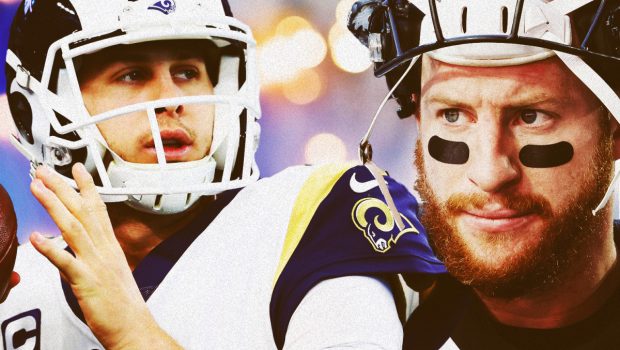 CRAP SHOOT TO CRAP OUT: THE 2016 DRAFTING OF WENTZ AND GOFF!

And that was after the Los Angeles Rams took Jared Goff at No.1.

Wentz got the starting job in Philly as a rook after Sam Bradford was traded. He went 18-11 over his first 29 games in the NFL before an injury forced him to the sidelines and opened the door for Nick Foles to lead the Eagles to the Super Bowl and the franchise’s first championship.

Despite being the No. 1 pick, Goff did not begin his career as the starter in LA and went 0-7 when the team did finally give him the reins during his rookie season. Following the rough start, Goff rebounded nicely under the leadership of head coach Sean McVay, going 24-7 as a starter in his second and third regular seasons, even leading the Rams to the Super Bowl in the latter, where they lost to the New England Patriots.

Of the two, Wentz probably flashed the higher upside, but Goff, at least under the tutelage of McVay, won more games. Both quarterbacks did enough that their respective teams picked up their fifth-year options in 2019 and signed them to pricey extensions that included tons of guaranteed money.

Both drafted high. Both paid at the top of the market. And now … both traded.

After the Rams dealt Goff and three draft picks to the Lions in exchange for Matthew Stafford two weeks ago, the Eagles agreed to send Wentz to the Indianapolis Colts for a third-round pick and a conditional second-rounder that has a good chance of becoming a first-round selection earlier this week.

It is only fitting the trades have so much in common as Goff and Wentz are actually fairly similar players, even outside of their first-round draft statuses and contract situations. Beyond wins and losses — which are also obviously related to the strengths and weaknesses of their teams overall — Wentz and Goff have put up similar numbers during their first five seasons in the NFL.

See the scrollable comparison below: