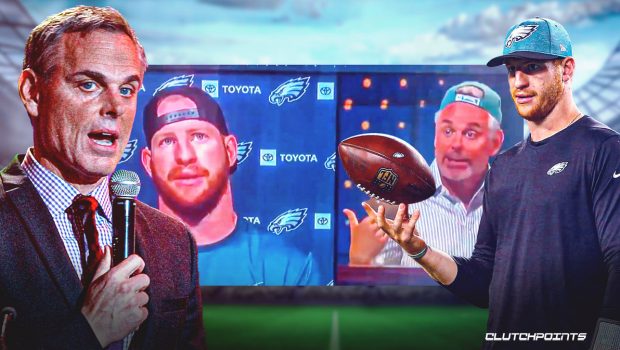 Responsibility for the Eagles’ 0-2 start has fallen heavily on quarterback Carson Wentz.

Wentz has regressed in Year 5 with the Eagles.

He is currently tied for the league league in interceptions (4) and sacks (8) while completing 58.8 percent of his passes on a league-low 6.0 yards per attempt.

While he has made several costly mistakes already this season, it appears one of the biggest was his decision to wear a backwards hat during a postgame press conference.

Fox Sports’ Colin Cowherd dropped one of his more unusual takes that was centered around a jab at Wentz’ headwear, via Joey Mulinaro of Barstool Sports:

Regardless, it seems choosing to wear a backwards hat on a zoom call was the most telling issue when it come his struggles in the eyes of Cowherd. Although the latter is accustomed to using witty analogies to help drive his point home, it is safe to say that this one fell vastly short of the mark. Eagles fans will notice.

If picking a franchise quarterback was an exact science, most teams would not be seeking out better options under center every year. Wentz has had ample time to firmly establish himself as the long-term option with the Eagles, but his hold on the position is slipping away with each bad performance.

Even Eagles head coach Doug Pederson acknowledged Wentz’ shortcomings following a disappointing 37-19 loss to the Los Angeles Rams. At this point, he has much bigger concerns than a bad impression from another talking head.