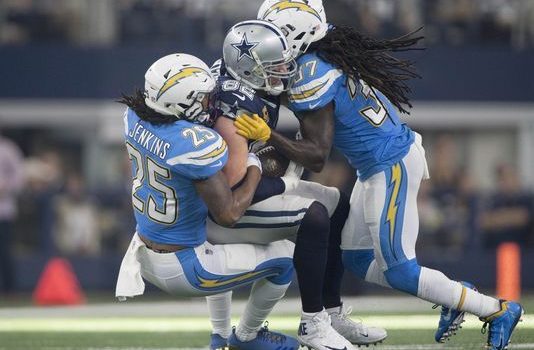 With a 28-6 loss to the Los Angeles Chargers, the Dallas Cowboys’ season is spiraling away.

Dallas has now dropped three consecutive games, including two home games in five days, to fall even further behind in the NFC playoff race.

At 5-6, the Cowboys trail the NFC East-leading Eagles by 4 1/2 games and will need a serious rally over the final month of the season to catch wild-card contenders, including the Panthers, Falcons and Seahawks.

“We’re not a good team right now,” Cowboys owner Jerry Jones said. “We can be a good team.”

The game was close at halftime, with the Chargers leading just 3-0, but only because of Los Angeles’ self-inflicted kicking blunders. The Chargers quickly control in the third quarter, with quarterback Philip Rivers throwing touchdowns to tight end Hunter Henry and receiver Tyrell Williams to take a 16-0 lead.

The Cowboys have been outscored 72-6 in the second halves of games during this three-game losing streak, and that stat might be the one that irks Jones and Cowboys players most.

While Dallas clearly misses suspended running back’s Ezekiel Elliott’s dynamic play, the Cowboys have been exposed in recent weeks of having far more issues that just one missing player.

“There’s really not a lot to second guess there. We’re obviously getting beat pretty good in the second half three games in a row that looks like a pattern,” Jones said. “That’s all I have. We’re very disappointed.”

While Dallas has clearly missed suspended running back Ezekiel Elliott during the sstreak, the Cowboys have been exposed in recent weeks of having far more issues that just one missing player.

Indeed, Jones said there were a “handful” of reasons for his team’s recent failures, and none of the answers were easy.

But it clearly starts with quarterback Dak Prescott, who has struggled in the Cowboys’ three games without Elliott, and an offense that didn’t get the lift it was expecting from the return of Smith, the standout left tackle who missed the previous two games with a groin injury.

Prescott appears to be pressing too much to make plays, an understandable reaction to frequently playing from behind and without Elliott.

He threw a pair of fourth-quarter interceptions – including one that was returned 90 yards for a touchdown, and he was sacked twice. That’s 14 sacks during this losing streak, after Prescott was sacked just 12 times in the Cowboys’ first eight games.

“I take responsibility in a loss like this, when the offense is in a funk,” Prescott said. “I’ve got to figure out what to do to get that whole unit rolling consistently.”

Chargers safety Tre Boston said it was clear to Los Angeles defenders that Prescott was “uncomfortable” and that the Cowboys clearly missed Elliott.

“Dak was a little flustered. He couldn’t get the ball off like he wanted to. I think they threw deep on me only a couple times, on the sidelines,” Boston said. “But you didn’t see a true game plan from how he executed today. We did a good job today on defense to really limit them. Once they couldn’t run it on first down, it was pretty much hunting for us.”

Smith was able to help manage the Chargers’ dynamic pass rush duo of Joey Bosa and Melvin Ingram, but he negated a 34-yard touchdown run by Prescott in the third quarter with a holding call on defensive lineman Darius Philon. And the offensive line woes continued when guard Zack Martin suffered a concussion and missed the second half.

Cowboys running back Rod Smith scored on a 2-yard run early in the fourth quarter to cut the Chargers’ lead to 16-6 and end a 10-quarter touchdown drought.

Even when the offense finally found a spark, the defense couldn’t slow the Chargers. Rivers led another quick touchdown drive, capped off with a spectacular 42-yard catch-and-run touchdown by receiver Keenan Allen, who broke at least four tackles as he spun away from Dallas defenders on the way to the end zone.

Shortly after his players retreated to the locker room – under a smattering of boos from a frustrated home crowd – Jones spoke to the entire squad, as he does periodically.

The Cowboys are frustrated, and sense their season is on the brink. But Jones isn’t willing to concede even as the losses mount, and said he believes the season can be turned around. That must start next Thursday against Washington.

The tone could not have been more different across the stadium, where Chargers players danced to ’90s hip-hop that blared from a portable loud speaker. Though the Chargers and Cowboys have matching 5-6 records, Los Angeles is trending up and happy to be able to show it on the team’s first nationally televised game since Week 1.

“We have a chance to show the world,” cornerback Casey Hayward said. “This is America’s Team, and that’s what we came to do, hit them in the mouth.”

Rivers threw for a season-high 434 yards and three touchdowns as the Chargers amassed 515 total yards. Suddenly looking like a legitimate playoff contender, Los Angeles is currently a half-game ahead of the Raiders for second-place in the AFC West.

If the Chargers can solve their kicking issues, they might be the most complete team right now in the division, with an explosive offense and a defense that has intercepted seven passes in the past two games, along with that scary pass rush from Bosa and Ingram.

Kicker Nick Novak missed a first-quarter field goal and a third-quarter extra point attempt while dealing with a back issue, and punter Drew Kaser handled kicking duties for the remainder of the second half. Kaser made one of three extra point attempts.