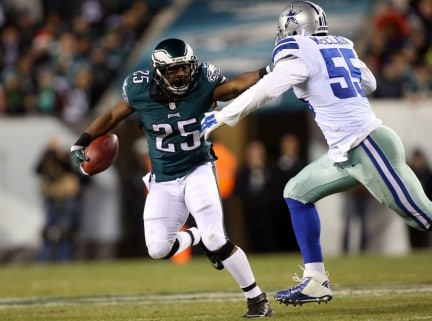 Linebacker Rolando McClain has been suspended for the season’s first 10 games for violating the NFL’s substance abuse policy, the league announced.

McClain, 26, was suspended the first four games of last season for violating the policy.

In March, the Cowboys re-signed McClain to a one-year deal worth up to $5 million. He is set to receive a $1.25 million base salary and could earn $125,000 for each game he is on the 46-man roster, maxing out at $2 million. He also has $1 million in playing-time incentives.

Per the collective bargaining agreement, McClain could be forced to repay the $750,000 signing bonus he received as part of the deal. McClain faces the possibility of being released, however, which would preclude the Cowboys from seeing the bonus money returned.

It is another chapter in a tumultuous career for McClain, who was the eighth pick of the 2010 draft by the Oakland Raiders. He was released after the 2012 season in which he was deactivated for the final five games. He retired twice, including after a stint of about one month with the Baltimore Ravens in 2013.

The Cowboys acquired McClain in a trade from the Ravens on July 1, 2014, after losing Sean Lee to a season-ending knee injury. In 12 games in 2014, McClain was credited by the coaches with 108 tackles. He also had a sack, nine tackles for loss, five quarterback pressures, two interceptions, five pass deflections and a forced fumble.