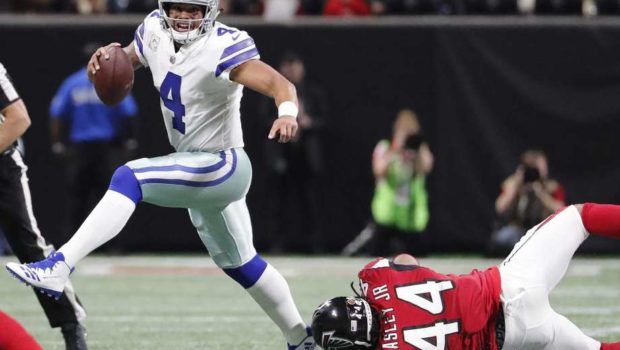 COWBOYS LOOK LIKE TOAST WITHOUT ZEKE IN 27-7 BEATDOWN BY FALCONS!

And they got thumped by the Atlanta Falcons 27-7, a score that doesn’t fully measure their offensive incompetence — the Cowboys managed just 233 yards.

Granted, Prescott was exposed without All-Pro left tackle Tyron Smith. But the Falcons sacked him eight times. That’s a season’s worth for some defenses.

Alfred Morris managed 53 yards rushing. Or what teams usually spot Elliott simply by getting off the bus. Prescott was the second-leading rusher, with 42 yards.

Elliott’s not coming back anytime soon, and the Eagles, the NFL’s hottest team, are up next.

After more than a year-long investigation into domestic abuse allegations, Goodell suspended Elliott in August for six games for violating the personal conduct policy. Elliott has vehemently denied abusing his ex-girlfriend, and prosecutors in Columbus, Ohio, decided there wasn’t enough evidence to charge him.

Elliott appealed, and asked that his suspension be stayed while the case played out. The NFL fought him on that, which led to a back-and-forth in the courts for the past three months. (If that sounds a lot like Tom Brady’s appeal in Deflategate, well, it is.)

The timing could not have been worse for the Cowboys, who began the day a game behind Carolina and Seattle for an NFC wild-card spot. In addition to next week’s game against the Eagles, Dallas has another NFC East game against Washington as well as road games against the Giants and Raiders before Elliott’s return Dec. 24.

He does have a Dec. 1 appeal hearing, but there’s no telling what the ruling will be or when it will be handed down. No, the Cowboys have to assume they’re going to be playing without Elliott for the long haul. And they’re going to have to do better than they did Sunday.

Replacing Elliott always was going to be tough. His 783 yards rushing are third-best in the NFL, and he takes heat off of Prescott. Stack the box, and Prescott can throw it downfield. Or give it to Elliott, anyway, who is one of the best at creating holes for himself.

But his absence was aggravated by the loss of Smith, who has been struggling with back and groin injuries. Without both of them, Prescott had the NFL equivalent of a “Kick me” sign on him. He was sacked four times in the first half alone, and he’ll be flinching for weeks at the mere thought of Clayborn.

Give Atlanta credit. The Falcons have been looking for answers for weeks and finally seem to have found some. Found some grittiness, at least.