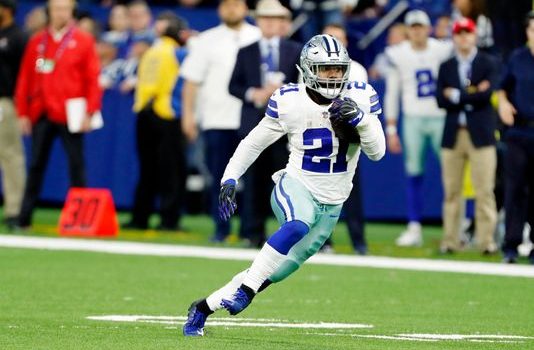 COWBOYS ‘EMBARRASSED’ 23-0 BUT STILL LEAD NFC EAST BY A GAME!

“That was a very embarrassing performance by us,” running back Ezekiel Elliott said.

But just as the Cowboys followed up their error-heavy loss to the Titans with five straight wins, could the franchise’s first shutout defeat in 15 years be the team’s next launchpad?

“Nothing’s going to be given.”

But when asked about Martin’s absence, Elliott said “we have enough talent to go out there and beat that team. We just came out there and played piss-poor.”

Elliott was one of the few Cowboys who was productive in the loss. The league rushing leader paced the Cowboys with 87 yards on 18 carries and caught a team-high seven receptions on eight targets for 41 more yards. The Cowboys compiled 292 yards of offense but never scored. Dallas went 0-of-2 in the red zone and had a 48-yard field goal attempt by Brett Maher blocked.

The Cowboys’ third-ranked rushing defense let up 178 yards, which was 91.2 more than the team’s average, to a Colts team that had gained 91 combined its last two games. Dallas’ pass rush failed to record a sack for the first time all season.

The locker room message was clear, Prescott said. Maybe the Cowboys were – in the quarterback’s words – “too hot to trot?”

The Cowboys, at 8-6, are still atop the NFC East. But with the Redskins beating the Jaguars 16-13, Dallas can’t lock up the division title or playoff berth this week.

The Cowboys’ focus now turns to finishing strong against Tampa Bay and the Giants. This loss offers “a lot to learn from,” Prescott said. “When you have a team like this, I don’t think ‘demoralizing’ is even in our dictionary.”

Still, zero points, an Elliott fumble 3 yards from the end zone and a Prescott interception 26 yards from home are among the memories leaving a sour taste.

“The way we didn’t give ourselves a chance pisses me off,” Prescott said. “Pisses everybody off.”

It’s time for the Cowboys to “take our medicine,” Elliott said.