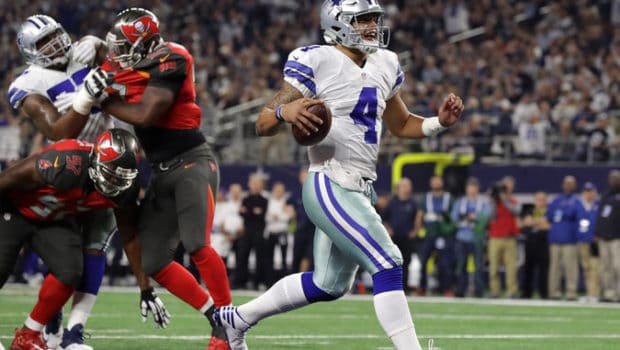 So much for a Dallas Cowboys quarterback controversy!

A single loss after an 11-game winning streak led to a mass exodus from the Dak Prescott bandwagon last week. But the rookie quarterback was apparently not willing to go off quietly into the night, having a big first half against Tampa Bay, and then holding off a valiant second-half comeback attempt by the Buccaneers in a 26-20 Dallas victory.

The game was a return to form for Prescott, who threw two interceptions in last week’s 10-7 loss to the Giants. For some doubters, that loss had restarted the quarterback controversy between Prescott and Tony Romo, which had seemed settled after Prescott and his fellow rookie, Ezekiel Elliott, led Dallas to theN.F.L.’s best record with a mix of big plays and relatively few mistakes.

Against Tampa Bay’s formidable defense, both Dallas rookies showed why the league has come to fear them. Prescott completed 32 of 36 passes for 279 yards, and nabbed his sixth rushing touchdown of the season, breaking a tie with Don Meredith for the franchise record, which Meredith had held since 1966. Elliott was also a driving force, carrying the ball 23 times for 159 yards and a touchdown, and he played to the home crowd in the first half by leaping into an oversized Salvation Army bucket after scoring. He increased his N.F.L.-leading total to 1,551 rushing yards, becoming just the seventh rookie to run for more than 1,500.

If there was a criticism of Dallas to be made it was that they had to rely on Dan Bailey to make four of his six field goal attempts to secure the win, but the team showed a great deal of resilience after Tampa Bay reeled off 14 unanswered points in the third quarter.

Overall, the game was a mixed bag for Jameis Winston, who looked dominant in the third quarter but also personally accounted for four turnovers in the game, including three interceptions. He also had a costly unsportsmanlike penalty potentially cost his team a touchdown in the first half. Given the ball with a chance to win it as time was running out, Winston threw an interception on 4th-and-12 that effectively ended the game.