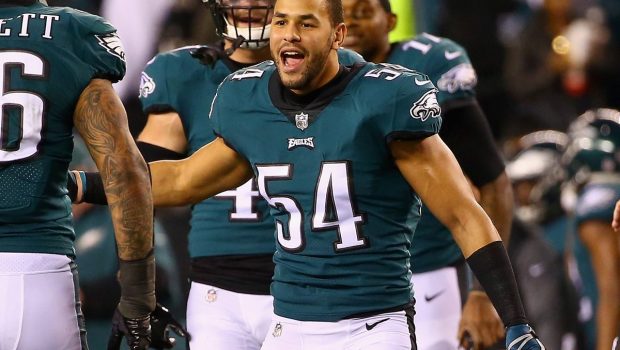 Eagles linebacker Kamu Grugier-Hill commented the other day that the Cowboys are going to “choke” in their week 14 matchup Sunday in Big D..

The 25-year-old quarterback then went on to say the reason the Eagles are talking trash is to bring attention to themselves.

“We’re focused on ourselves in this locker room about what we need to do to get better in each and every phase of this game to be ready for this week.

“We’re not worried about he say, she say.”

He added: “When you play a team like this, a game like this that means what it means, what somebody says doesn’t add any motivation.”

Grugier-Hill started the conversation on Wednesday when he said: “Look at Dallas’ history, they always choke. So we’ll go down there and make them choke.”

The Cowboys (7-5) are coming off a 13-10 victory over the New Orleans Saints and have won four straight, while the Eagles (6-6) defeated the Washington Redskins 28-13 in week 13. The two faced off against each other on November 11 when the Cowboys won 27-20.

The Birds are the defending Super Bowl champions but trail Dallas by one game for the lead in the NFC East.