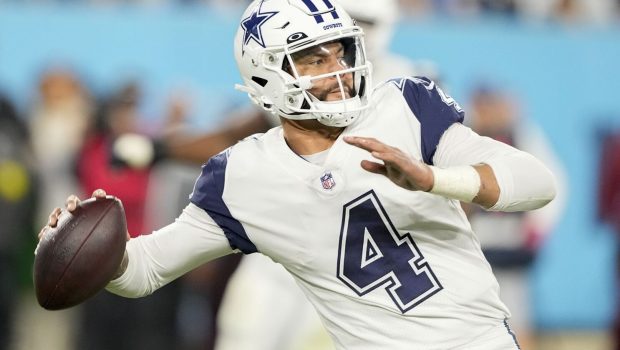 Dak Prescott completed 29-of-41 attempts for 282 yards, two touchdowns, and two interceptions in the Cowboys’ 27-13, Week 17 win over the Titans, adding 11 yards on three carries.

Prescott threw two first half interceptions on passes intended for Dallas tight ends, each of which would go down on Dak’s ledger but were more mistakes by the intended receiver.

The Cowboys also lost a fumble in the first half on a failed exchange from the center, which would also go down on Dak’s ledger.

The three early miscues would allow the Titans to go into halftime down only 10-6.

Two second half touchdown passes to tight end Dalton Schultz would ultimately salvage the Cowboys the win over a Titans team resting many key starters, keeping their slim hopes alive for the top overall playoff seed out of the NFC.

The Cowboys now get a nice breather before traveling to Washington to face the Commanders in the final outing of the regular season in Week 18, a game that could carry little to no playoff implications should the Eagles beat the Saints in Week 17.