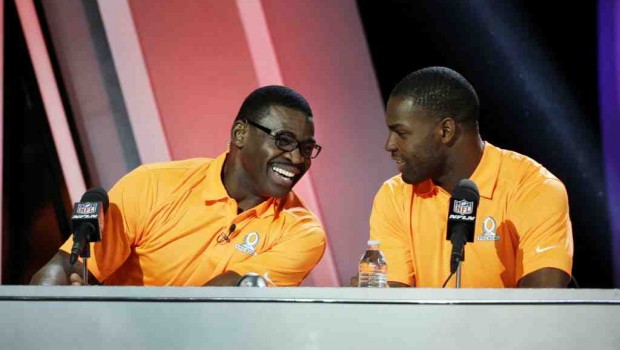 Michael Irvin and DeMarco Murray on the NFL Network.

You wouldn’t expect Cowboys legend and Hall of Fame receiver Michael Irvin to show the Eagles a level of respect.

Don’t forget, when he was knocked cold and was laying lifeless on the Vet’s playing field lots of shameful Eagles fans cheered as if the Birds had just scored.

So, his opinion on the NFC East is surprising.

Irvin, who admitted it was tough to put the Eagles over the Cowboys, said he had no choice after seeing his formal rival signing away running back DeMarco Murray this offseason.

“Philadelphia upgraded immensely in that department,” Irvin said. “LeSean McCoy is a bad man, he’s a great player and he beats defenses…I call LeSean McCoy a guy that beats defenses. DeMarco Murray is a defense beater. There is a difference. He ain’t running around nobody. He’s running through you.”

Murray ran over plenty of defenders last season, finishing with 1,845 yards, best in the NFL. The career season was good enough to secure a whopping five-year, $40 million deal with $21 million guaranteed from the Eagles.

The big deal was met with some criticism, as paying a premium price for a running back is far from a trend in today’s NFL. Irvin, however, said anyone who thinks the Cowboys can get the same results from a different running back is going to be sadly mistaken.

“You can’t tell me, and you can’t convince me, that you can just stick anybody in (at running back),” Irvin said. “If they would have drafted a Melvin Gordon or if they would have drafted a Todd Gurley, then that may be something. But with Darren McFadden? Maybe he’ll have some great things going but right now I would take Philadelphia and then Dallas in the NFC East.”

The Cowboys certainly didn’t seem to believe just anyone could get the job done last season, as they handed to ball off to Murray a staggering 392 times. Murray’s top backup, Joseph Randle, had just 51 carries.

“Understand what a great running game did for Tony Romo last year, and what it will do for Sam Bradford this year. I understand that LeSean McCoy can get out and catch passes, and yes, he is better than DeMarco Murray in that department. But it still puts me in a guessing game on what the defense is running, what kind of defense they are in, who is open, who isn’t,” Irvin said. “With DeMarco Murray in the game, (you know) what the defense is going to run.”

With Murray now with the Eagles, Irvin said even Sam Bradford, who had an up-and-down NFL career filled with injuries during his time with St. Louis, could see success.

“You gotta put all of your guys on the line of scrimmage to stop DeMarco,” Irvin said, “and then your passing game can do what it (wants).”