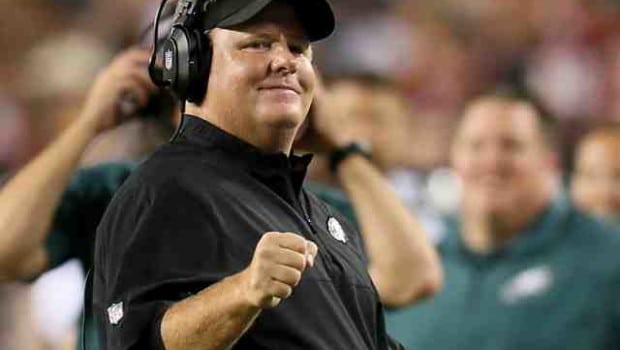 Look, no one is perfect and everyone gets it wrong from time to time — even FASTPHILLYSPORTS.COM.

But in the case of Les Bowen’s reporting and commentary about Chip Kelly, the great screenwriter William Goldman’s comment about how to guarantee a successful movie comes to mind:

“You can have great stars, a brilliant script, wonderful music and an ingenious marketing plan, and you can still fail.

“The truth is that nobody knows nuthin’.”

Chip Kelly has had the most successful Philly debut since Pat Olivieri invented the cheese steak in the 1930s.

Kelly might not last as long as the cheese steak has at Pat’s, but his remarkable turnaround of a moribund Eagles franchise has to be the story of the decade in this sports-crazy town.

Especially when the other three major teams have been unwatchable.

Andy Reid was finally fired after 14 seasons, and there was precious little talent left when Kelly took the job in mid-January 2013 after a four-year, 46-7 career at the University of Oregon.

Somehow, Kelly has been able to reverse the Reid curse, and has registered two straights 10-6 seasons.

Now, with a massive turnover in personnel that has waved buh-bye to DeSean Jackson, Shady McCoy, Jeremy Maclin and Nick Foles, among others, he has brought in his own studs — Sam Bradford, DeMarco Murray, Ryan Mathews and Kiko Alonso.

So, what has been the reaction of the lame-ass local media?

They run around with their hair on fire, still judging the razor sharp Kelly by the standard of the slow-walking, slow-talking, slow-thinking Reid who plotted out every game’s first 15 plays on a sheet because he saw the great Bill Walsh do it, and never wavered in his method or belief, win or lose.

Plus — with Kelly and his razzle-dazzle methods — watching football in Philly has become fun once again.

Almost as much fun as watching and listening to the local media flip out over every jot and tittle of what Kelly was doing that didn’t conform to their expectations. It was almost as if they were intentionally fighting the last war, something generals are wont to do. But not journalists.

The truth is that 30 months ago no one in what passes for the local media knew anything about Chip Kelly, other than what was seen on “SportsCenter.” To them, he was a college revolutionary whose No Huddle offense would work in the loopy world of the Pac-12 — it is the Left Coast, after all — but never in the NFL, which, as the late, great Al Davis would say, really means Not For Long.

As in, Kelly will come and go quickly.

Instead, as his first two seasons have amply demonstrated, Kelly is a smart coach who, unlike his predecessor, is also flexible. If things don’t work out the way you had planned you have to change.

Kelly also showed his dexterity with the press and seemed to enjoy the jab-and-thrust nature of media relations — especially in contrast to the metronomic Reid.

As a result, almost everything written about Kelly’s thinking and methods in the local media is wrong. The former hockey writer whom the Daily News transferred to pro football about five years back, was an all-in Kelly know-nothing from the jump.

On January 2, 2013 — a week or so before Kelly got the Eagles job — Bowen schlepped to Arizona to see Oregon play in the Fiesta Bowl, and Bowen was quoted on local TV as saying, “If you wanted to design a quarterback who was the exact opposite of what Oregon runs, he would be Nick Foles,” the Eagles fairly immobile QB.

In other words, Chip Kelly knows but one way to construct an offense. This from a “reporter” who knew nothing about Kelly or football. And still does not.

Then Kelly got the job and all bets were off as the media pounced at every turn.

Bowen wrote that Kelly “was evasive at best” when asked where injured Kenny Phillips was during an OTA in 2013. Kelly refused to answer pointed questions and Bowen longed for the days when the coach would start each session with a quick list of injuries. As in Andy Reid.

One thing I thought I knew during the final days of the Matt Barkley-Tim Tebow drama: the Eagles weren’t going to get rid of both of them, with their starting quarterback, Sam Bradford, coming off two left ACL tears. They would keep three quarterbacks.

Sooo, as I waste a sunny Labor Day weekend Saturday afternoon in the NovaCare media room tapping this out, how many quarterbacks do the Eagles have?

They will have three, sometime soon, Kelly assured a few reporters gathered at a hastily called press conference early Saturday afternoon. The third might end up on the practice squad, or might end up on the active roster, depending on who’s out there.

All those weeks we spent scrutinizing Barkley vs. Tebow, we ignored one possibility – that Kelly wasn’t impressed with either of them, that he would press “reset” at the end of the preseason.

“We want to look at everybody available,” Kelly said Saturday.

How about the suckers who forked over a buck to read your bullshit?

Look, no one is perfect and everyone gets it wrong from time to time — even FASTPHILLYSPORTS.COM.

But in the case of Les Bowen’s reaction to Chip Kelly, the great screenwriter William Goldman’s comment about how to guarantee a successful movie comes to mind:

“You can have great stars, a brilliant script, wonderful music and an ingenious marketing plan, and you can still fail.

“The truth is that nobody knows nuthin’.”