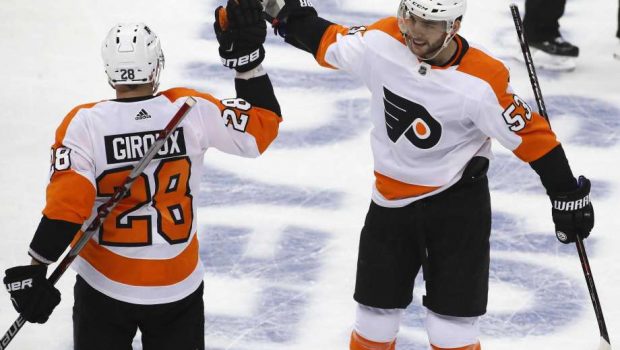 “It was pretty tough for us to walk out of the rink a couple nights ago,” Flyers coach Dave Hakstol said last night. “That wasn’t us.”

So what did Hakstol do after the Flyers’ 7-0 embarrassing loss to the Pittsburgh Penguins in game 1?

No switching up the lines.

No swapping the goaltenders.

Hakstol didn’t think changes were necessary. As ugly as getting blown out by Pittsburgh in Game 1 looked, it felt even worse. That was motivation enough. No personnel changes necessary.

Sean Couturier had a goal and two assists, Brian Elliott stopped 34 shots and Flyers cooled off the Penguins 5-1 to even the first-round series at a game apiece.

“Said it coming in, nobody is really giving us a serious chance in this series,” Hakstol said. “I don’t know if anybody still will. I do know this, we’ve got it down to a five-game series and we introduced ourselves into this series tonight.”

Shayne Gostisbehere, Travis Konecny, Andrew McDonald and Nolan Patrick also scored for the Flyers. Two nights after getting crushed 7-0, Philly responded by keeping Pittsburgh stars Sidney Crosby and Evgeni Malkin in check and taking advantage of what few chances it produced against Matt Murray to beat the Penguins for the first time this season.

“For all the doubters out there, there you go,” Flyers forward Claude Giroux said.

Game 3 is tomorrow at the Wells Fargo Center.

Patric Hornqvist scored Pittsburgh’s lone goal with just over 5 minutes left to avoid the shutout, but the Penguins looked ordinary for long stretches after looking unstoppable in the opener.

Pittsburgh outshot the Flyers 35-20, a number that didn’t include a pair of shots that hit the post early or Crosby fanning on a wide-open net in the waning seconds of the second period. Elliott, pulled in the middle of the second period in Game 1, also stoned Crosby on a breakaway earlier in the second.

“You always look back and there are the `what ifs’ but that happens sometimes,” Crosby said. “We just have to stay with it. That’s the way the playoffs work.”

Matt Murray’s shutout streak dating to the 2017 Stanley Cup finals ended at 225:49 when Gostisbehere scored on the power play late in the first period. Murray finished with 15 saves to lose for just the third time in 17 home playoff starts in his career.

The Flyers struggled to sustain pressure on Murray but took advantage of what few opportunities they created. Philly went on the power play late in the first period when Pittsburgh’s Zach Aston-Reese was called for boarding and the Flyers — who didn’t even manage a shot on net during four power plays in Game 1 — needed just one to take the lead.

Gostisbehere sent a shot from the point that made its way through a Patrick screen, between Murray’s legs and into the net with 37 seconds left in the opening period to end the fourth-longest playoff shutout streak since 1990.

Murray actually managed to get his right pad on Couturier’s shot from in front but the puck popped up, caromed off Pittsburgh defenseman Kris Letang and into the net 47 seconds into the second.

The Penguins began pressing but Elliott responded. Crosby broke in alone just past the game’s midway point but Elliott’s glove swallowed up the Pittsburgh captain’s backhand attempt. Late in the second, Crosby needed to simply redirect the puck into the net while standing at the right post. Instead, it skittered straight across the goal mouth and out of harm’s way. Crosby smashed his stick over the crossbar in frustration.

“If I find a way to put that one in, it’s 2-1, it’s a different game,” Crosby said. “So, that one and the breakaway was the big turning point in the game.”

When Konecny held off Chad Ruhwedel and chipped the puck over Murray’s glove 1:21 into the third the Flyers had control. Just over 18 minutes later they had their first victory Pittsburgh in 383 days to go home with the series even.

“It was a little weird last game,” Elliot said. “I think this game we really came out and everybody played their role really well. We played a great team game.”