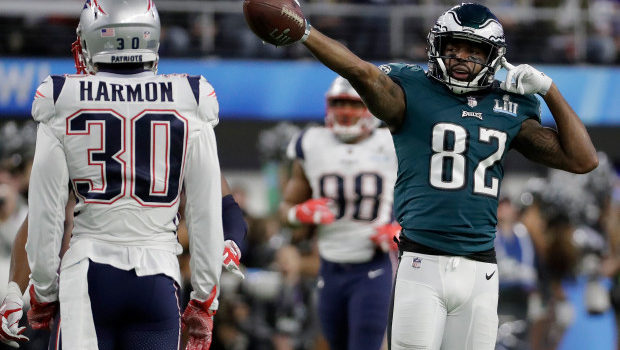 COULD EAGLES BRING BACK TORREY SMITH TO REPLACE D-JAX?

By the time of his mid-day press conference, Pederson was already backtracking from his morning comments on his weekly radio show on 94WIP sports radio, when he said he expected Jackson back for the Nov. 17 game against the Patriots.

“Until we gather this information that we’re going to get, I’m not going to speculate one way or the other right now,” Pederson said later.

Pederson did say the Eagles will “take a look” at bringing in a wide receiver this week while the team is off, an indication both that Jackson would be out for an extended period, and that the Eagles were dissatisfied with the production of the wide receivers on the team.

The trade deadline has passed, so any receiver brought in would have to be a free agent.

They can also look at former Cowboys receiver Dez Bryant, who tore his Achilles last November just after signing with the Saints; Michael Floyd, most recently with Baltimore; and De’Anthony Thomas, whom Pederson knows from when he was the Chiefs’ offensive coordinator.

“We’ve got to take a look at it, obviously. It’s real,” Pederson said about upgrading at wide receiver.

Pederson didn’t give a glowing review of the Eagles’ two top remaining receivers in Alshon Jeffery and Nelson Agholor.

Jeffery had two drops against the Bears, including one that would have converted a third down in the fourth quarter as quarterback Carson Wentz was getting hit. The Eagles, nursing a five-point lead, punted back to the Bears.

Jeffery did convert a third-down pass into a first down during an Eagles’ drive later in the quarter that ended up using 8 minutes, 14 seconds. The drive culminated in a field goal with 25 seconds left that put the game away.

“I think overall, they’ve been good. I would say they haven’t been great,” Pederson said. “I think they would echo that.”

The Eagles have gotten much less from Mack Hollins and rookie J.J. Arcega-Whiteside, their second-round draft pick. Neither has caught a pass since September. Hollins has played at least 46 percent of the snaps in each of the last five games, with no receptions.

“When you’re the sixth, and possibly seventh guy, in the progression in the scheme of things, sometimes it’s hard to get the ball going in that direction,” Pederson said. “We go in thinking the Alshons, and the DeSeans, Nellies, the tight ends and backs (are the priorities).”

The Eagles have used more two tight-end sets with Zach Ertz and Dallas Goedert, who each played 70 percent of the snaps against the Bears. Running back Miles Sanders is also heavily involved in the passing game.

The only wide receiver with more receiving yards than Sanders’ 305 is Jeffery, with 353. Agholor has 282 yards.

Pederson said he had no regrets for playing Jackson on Sunday, saying he had a good week of practice. But would sitting out the game against the Bears, plus the week off, have helped?

“Sitting here today, you kind of go, ‘Alright, maybe you should have (held him out),’ ” Pederson said. “You’re second-guessing now. We’re in a business where we gotta play and we gotta play with the guys that are in uniform.”

Jackson won’t be, perhaps for the rest of the season.