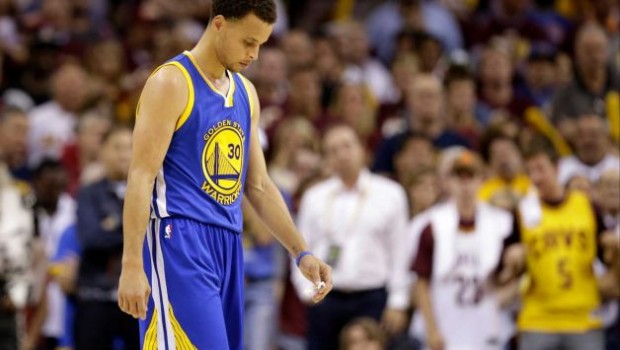 The MVP of the NBA finally found his shooting stroke in the fourth quarter Tuesday night.

Unfortunately for the visiting Golden State Warriors, guard Stephen Curry’s final 12 minutes were not enough as the Cleveland Cavaliers took a 96-91 victory and a 2-1 lead in the NBA Finals.

Curry scored three points in the first quarter, a 3-pointer at 10:28, and was held scoreless in the second. He scored seven points in the third and then erupted for 17 points in the fourth as the Warriors comeback attempt fell short and the Cavs took a 2-1 series lead.

“Nothing felt different about the fourth quarter than it did early in the game,” said Curry who had 27 points, six rebounds and six assists. “Early in this game I felt like they were right there. So I still feel confident. It’s obviously good to see a couple of shots go in.

“I think I found something when it comes to how I’m going to be able to attack their pick-and-rolls and even certain iso situations. I’ll keep that in the memory bank going into Game 4, and hopefully it has a trickle-over effect into the first quarter of the next game.”

The Cavaliers will host the Warriors at 9 p.m. Thursday for Game 4.

“Steph got really hot in that fourth,” said Cavs guard J.R. Smith, who scored 10 points. “That was tough for us. He got going on that reverse layup, but we stayed the course and tried to shut down everybody else.”

Cavs guard Matthew Dellavedova continues to be a pest defensively, and Tuesday he also scored 20 points and had five rebounds and four assists.

“I’m going to count on Delly as always,” said Cavs forward LeBron James after scoring a game-high 40 points and also finishing with 12 rebounds and eight assists. “He’s going to give everything he’s got. His body, he’s going to throw his body all over the place. And he’s going to compete at a high level however many minutes he’s out on the floor.”

Warriors forward Draymond Green praised Dellavedova for being “relentless” and for “getting every loose ball” on the floor.

“That is something that we have to change,” Green said. “I take it upon myself to change that. He brings a spirit to the floor and a toughness to the floor.”

When asked if his team was matching the Cavs toughness, he said: “Uh, no.”

“This game we didn’t get stops until late,” said Green, who had seven points and seven rebounds. “When you don’t get stops, it’s hard to get breaks.”

The Cavs came out fast and led 24-20 after one quarter and 44-37 at halftime. The lead ballooned to 68-48 with 2:52 to go in the third when the Cavs put together a 12-0 run that included five points from James, two points from Dellavedova, a 3-pointer from J.R. Smith and a two-hand dunk from Timofey Mozgov (six points, five rebounds).