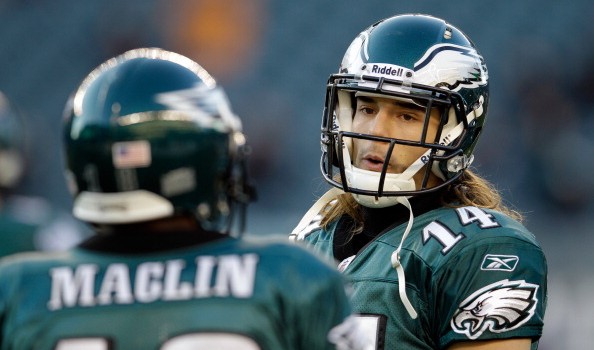 In just a little more than a year, Eagles wide receiver Riley Cooper has gone from racially charged lightning rod to Nick Foles’ favorite target to Mark Sanchez’ pain in the ass.

And it does seem that coach Chip Kelly and his assistants are constantly being asked about his performance or lack thereof.

This year, they’re continuing to step up and have his back amid what appears to be a drop off in production, but is really just an offense shifting and asking Cooper to do different things.

Despite the fact that Cooper will catch more balls than he did last season (he currently has 46 catches after having 47 in all of 2013), the yardage and touchdowns have been tough to come by (470, 1). Center Jason Kelce told the Daily News that he’s seen Cooper mature a great deal throughout the year.

Cooper is perhaps the best case study in how the zone defense has limited this team’s big-play ability.

“Because they’re playing zone,” Cooper said Monday. “Those deep balls, teams are kind of taking away. So, we need to come at them a different way. Dink and dunk. Get the run game going.

“I just think that we had so much success last year getting singled up, DeSean and myself. They just played single-high safety. Shady [McCoy] was having such a great year that they needed to keep an extra safety in the box to account for him. So, I think they’re just trying to switch it up. We’re getting predominantly zone and the longer throws just aren’t there.”

Cooper’s numbers will see more scrutiny this year because the wideout is making more money (he signed a five-year, $22.5 million). Of course, the addition of Jeremy Maclin and Darren Sproles weren’t going to help Cooper see more targets. Until defenses significantly shift the way they cover the Eagles, he’ll remain a strong blocking option and secondary receiver.

In the meantime, he is lucky to have coaches and teammates who are willing to point that out.