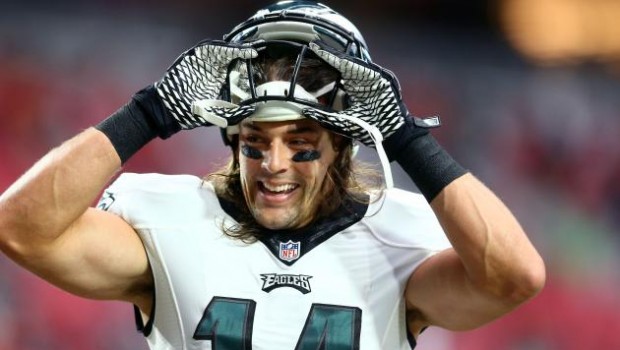 IF COOPER IS CUT, IT WILL BECAUSE HE SUCKS, NOT BECAUSE OF RACE

There has been lots of huffing and puffing about why Eagles’ coach Chip Kelly should cut underachieving wideout Riley Cooper.

Morning mush mouth Angelo Cataldi thinks it’s the only way Kelly can put to rest the accusations that he is a racist.

If Cooper is cut, it will be on the merit of his performance, which was woeful in 2014.

This year, Kelly signed free-agent wide receivers Miles Austin and Seyi Ajirotutu (the latter more for special teams), drafted wideout Nelson Agholor in the first round and have up-and-coming Jordan Matthews on the roster.

The makeover will continue with Cooper’s release. In 2013 he caught a career-high 55 passes. But one year after averaging 17.8 yards per reception on 47 grabs and eight touchdowns, Cooper scored just three times (twice in a Week 16 loss to the Washington Redskins) and averaged only 10.5 yards per catch in 2014.

Unless Kelly can motivate the mercurial Cooper, it will make sense to cut him loose.