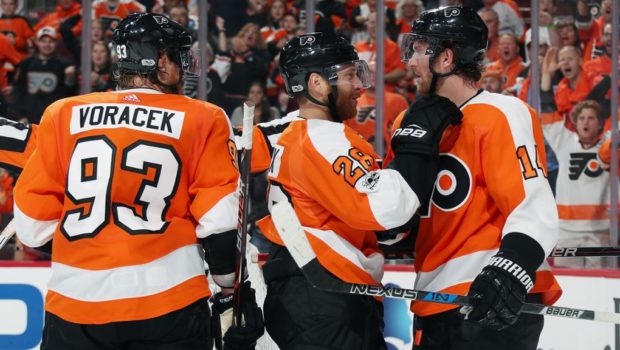 COOKING AT HOME! FLYERS EXPLODE FOR 8-2 WIN OVER CAPS!

That was quite a home opener!

The Flyers’ top line of Claude Giroux, Sean Couturier and Jakub Voracekcombined for 10 points in an 8-2 win against the Washington Capitals.

“We know that we like to pass the puck around and make nice plays,” Couturier told NHL.com. “But at the end of the day, we have to shoot the puck when we have the chance and tonight that’s what we did.”

It’s a line that still is finding its way together. They have been teammates since 2011-12, but this is the first time they’ve played together consistently at 5-on-5.

Scott Laughton had his first two-goal NHL game, Wayne Simmonds had a goal and an assist, and Valterri Filppula scored. Brian Elliott had 21 saves for the Flyers (3-2-0) in their home opener.

The eight goals were the most the Flyers have scored since a 9-2 win against the Columbus Blue Jackets on Nov. 5, 2011.

Jakub Vrana and Nicklas Backstrom scored for the Capitals (3-2-1), who were playing the second game of a back-to-back. Philipp Grubauer had 29 saves.

“I think we definitely made too many mistakes,” Capitals defenseman John Carlson said. “… I think it started in the neutral zone for us. I think they did a good job against us and we kind of shot ourselves in the foot too many times.”

The Flyers led 5-2 after two periods, and got goals from Laughton, Couturier and Giroux in the third.

Couturier’s goal initially did not count, but was ruled to have crossed the goal line after video review.

Philly had three of the four goals scored in the second period.

Simmonds’ power-play goal at 3:15 put the Flyers ahead 3-1, and Giroux tipped a Couturier shot past Grubauer at 10:32.

Laughton gave the Flyers a 2-1 lead with a shorthanded goal with 1:02 left in the first period. Grubauer raced out to play the puck in the circle to his right but couldn’t control it, and Laughton stickhandled around him and tucked it into an empty net.

Couturier scored on a rebound at 7:18 of the first period to give the Flyers a 1-0 lead. The Capitals tied it on Vrana’s goal at 9:25 of the first.