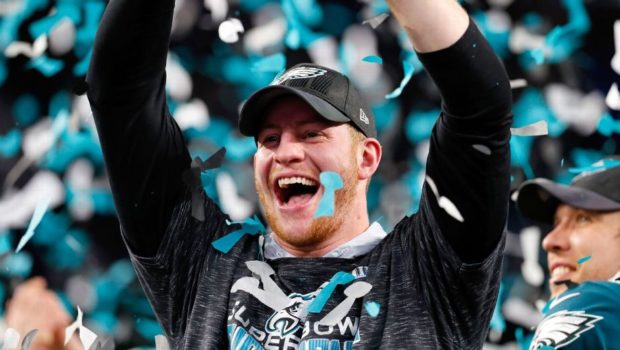 Making historical comparisons can be tricky because the game changes so much even just year to year, so looking across decades is often nearly impossible.

Complicating matters even more, we know the full scope of the history since then. The book hasn’t been written on this Eagle team.

The career arcs of Carson Wentz (above), Doug Pederson and John DeFelippo could go a long way in determining how many similarities there are between these two teams.

There are some obvious differences: The Eagles don’t have an all-time great like Lawrence Taylor to single-handedly wreck opponents.

We think Wentz is more talented than Phil Simms, but we don’t know for sure he’ll have a better career.

In the late 1980s and early ’90s, the run game played a much bigger part of any offense and defenses were different as a result. A power-run, defense-first team could win a Super Bowl and compete every season.

That blueprint is all but extinct in the modern NFL.

The similarity lies in the coaching.

When Bill Parcells went on his run with the Giants, he set a new standard for coaching in the NFL. Rules about team building employed by Parcells still set benchmarks and baselines today.

His career has been pretty decent too, speaking of new standards.

No one should assume Doug Pederson is Bill Parcells, or that Frank Reich or DeFilippo are the next Bill Belichick, but they and Howie Roseman are rethinking the modern NFL paradigm, challenging it, and pushing it forward: