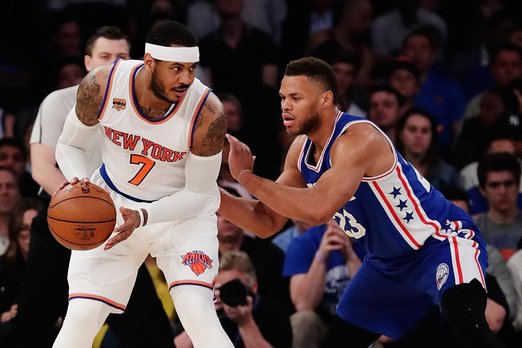 Let’s put last night’s Sixers’ 114-113 loss to the Knicks at the Garden into some perspective:

Rookie Dario Saric, who has been playing with plantar fasciitis for two weeks, was held out as a precautionary measure.

Sixers coach Brett Brown said Saric reacted “with frustration (but) we decided to be smart.”

The Sixers’ loss and Magic’s win over the Pistons allows the Sixers to finish with the league’s fourth-worst record. They’ll have an 11.9 percent chance at the No. 1 pick. There is a 37.8 percent shot they’ll be in the top 3. The worst they can do is seventh.

The Sixers can swap first-rounders with the Kings, who went into Wednesday tied for eighth-worst in the league. If that remains the case, the Sixers could add Sacramento’s 2.3 or 2.2 percent chance (depending on the coin flip) at No. 1 to their odds.

The Sixers, who will have four second-rounders in the June 22 draft, were in the top three during each of the previous three drafts. Joel Embiid (No. 3), Jahlil Okafor (No. 3) and Ben Simmons (No. 1) were their top selections while winning 19, 18 and 10 games, respectively.

Second-year center Okafor missed the last 11 games due to a sore right knee. Asked if the knee could require surgery — as it did in March 2016 — Brown replied, “I don’t know that.”

The best thing that could happen for Okafor would be for him “to get healthy and back to being Jahlil Okafor,” according to Brown.

Undrafted rookie Alex Poythress, who joined the team less than two weeks ago, started in Saric’s place. The Sixers only had nine available players.

Given the injured players that could be healthy and at least one top-7 selection, the team is optimistic about what 2017-18 could bring.

“All over the place you go into the summer with hope,” Brown said.

“Every time we were healthy and rolling this year, we had some glimpses of this team being pretty special and effective against the best teams in the league,” said Nik Stauskas.