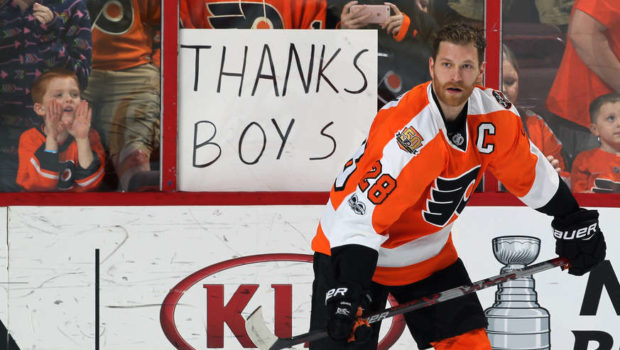 For Flyers fans among you who have been impatient with current management, I’ve got bad news for you:

The flailing franchise isn’t being sold any time soon!

Comcast Spectacor CEO Dave Scott sat in on yesterday’s exit news conferences and then held one of his own.

He made it clear that Comcast has no intention of selling the team, that ownership is fine with GM Hextall’s build-from-within plan and that the Flyers are valuable to Comcast on a number of levels.

“It’s a great success story. (Comcast CEO) Brian Roberts grew up here in Philadelphia. He’s a big fan. I talked to him this morning. He called me before I came over. We’re all in this. We love the Flyers. It’s working for us.’’

“Comcast Spectacor runs very independent from Comcast Corporation,’’ Scott said. “They were involved with us for 20 years with Brian and Ralph (Brian’s father) and now I’m the CEO. So really nothing has changed on that front. We’re going to invest in the long run for the long term.’’

Scott was asked point-blank if the Flyers are for sale.

“It was a terrific year from a business perspective,’’ Scott said. “It was probably one of the best years we’ve ever had. Ron’s our guy. We believe in the system, we like the vision, the strategy, the pipeline. These young players coming up, there’s a lot of excitement. From the business side, it’s been terrific.’’

Scott has learned the sport from some of the game’s best. Before coming to Philadelphia, he spent a while in Detroit with Red Wings iconic owner Mike Ilitch, who passed away this year.

“I can tell you I’ve had a lot of great teachers,’’ he said.

I watched a lot of games with them. I spent a lot of time with (Flyers president) Paul (Holmgren), spent more time with Ron. I’ve got a long way to go but I’ve been in Philadelphia for 12 years and I was actually in Detroit for six years before that and got into the Red Wings.’’

“I’ve got all the confidence in the world with Paul as president and Ron as general manager,’’ Scott said.

“I think we all have a job to do here. My job is to make sure we have the resources and we’re invested in the team for the long run and go for the Cup. We’re the Flyers, we’re going to go for it every year. That’s our heritage.’’

Ultimately, Scott is like any other hockey fan. He wants to see the Stanley Cup raised in his city.

“We’re going for it, we’re building towards it,’’ Scott said. “I think we had some great spots this season and we want to build on those great spots. There’s a lot of optimism.’’