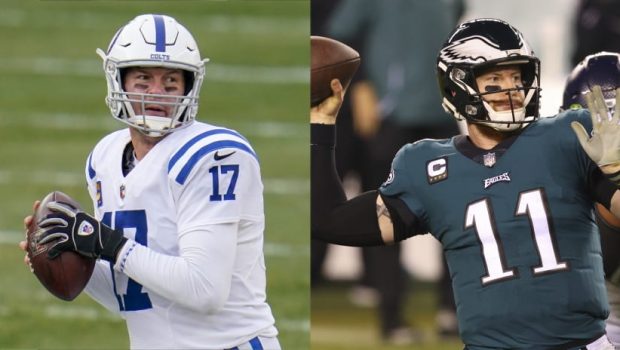 COLTS RIVERS SUCKED, SO EAGLES WENTZ MAY BE HEADED TO INDY!

If the Eagles decide they want to unload Carson Wentz because his skills are diminished but his salary is not, yesterday’s Colts loss to the Bills provided a perfect destination:

Indy, where he could reunite with Frank Reich, who was his offensive coordinator during his first two years with the Eagles in 2016 and 2017.

Indy became a logical spot because the Colts Philip Rivers sucked in the loss to the Bills.

Needing a few yards to get the Colts into field goal range, Rivers threw consecutive incomplete passes, setting up a Hail Mary attempt on fourth down that meekly fell short of the end zone. It was an anti-climactic ending to an eventful second half in which the Colts clawed back from a 24-10 fourth-quarter deficit.

The Colts season is now over and with Rivers set to hit free agency, they have to decide if they want to resign the 39-year-old or look for another quarterback via free agency, trade, or the draft. The Colts have a deep, balanced roster and they upgraded at several positions heading into this season, but third-stringer Jacob Eason, a fourth-round draft pick in 2020, is the only quarterback Indianapolis currently has under contract for 2021, with both Rivers and Jacoby Brissett hitting free agency in March.

Rivers considered retiring after the 2019 season but decided to sign with Indianapolis because the Colts gave him an opportunity to start on a playoff-contending team. As for the Colts, they probably feel validated in their decision to bring in Rivers.

The question for the Colts is if it’s enough to give Rivers another shot. He told The Athletic earlier this week that he’d like to keep playing, though he said how the Colts fared in the playoffs could alter his feelings somewhat.

Colts coach Frank Reich indicated after the game that Rivers could be back.

“Those things will work themselves out, but he exceeded expectations in my mind in terms of what he was bringing to the team on and off the field,” Reich said.

If not, Indianapolis would have to look to the draft, or go after a veteran quarterback like Wentz, Jimmy Garoppolo, Matthew Stafford or Sam Darnold.

Wentz’s best NFL season came when Reich was offensive coordinator in Philly, and he could be a target if he’s willing to restructure his contract to facilitate a trade.