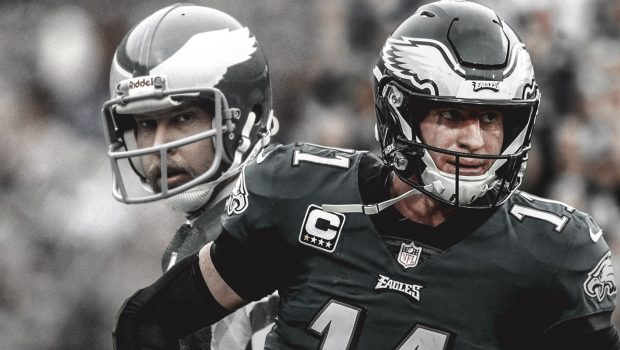 So, the trade market for Eagles quarterback Carson Wentz has cooled considerably since early-week reports that they had been offered two No. draft picks for the overrated and overpaid quarterback.

And we don’t know what sources former Eagles QB Ron Jaworski has or if they are any good.

But let’s assume for the moment that they are solid:

“The talk is (them trying to get) a No. 1, almost similar to what Detroit got (in) the Jared Goff situation … That won’t happen here. That will not happen.

“My understanding is that the Colts have offered two second-round draft choices, maybe a third or fourth somewhere down the road. That appears to be the best offer … the best actual offer that has been made.”

Indianapolis has long been the most popular destination among speculated landing spots for Wentz, not only because the Colts have a dire and admitted need for a new QB, but because Wentz has a friendly and successful history under coach Frank Reich, his former Eagles offensive coordinator. Colts GM Chris Ballard, meanwhile, hasn’t denied that Indy has explored Wentz as a potential trade target, with multiple reports suggesting the Colts and Bears are the perceived front-runners in talks for the former Pro Bowler.

According to Jaworski, however, the Eagles appear adamant about getting at least one first-round pick back for Wentz. ESPN’s Adam Schefter reported in January that Philadelphia would likely seek a minimum of a first-rounder in exchange for the QB.

As for the possibility of Philly holding firm and ultimately welcoming Wentz back in 2021, even though the QB reportedly prefers a fresh start elsewhere? Jaworski doesn’t see it, telling Skversky the two sides’ relationship “has really gone off the rails.”