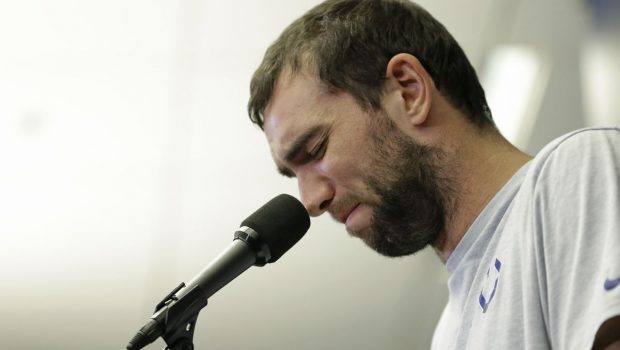 COLTS ANDREW LUCK GIVES UP CAREER BECAUSE OF INJURIES!

Indianapolis Colts quarterback Andrew Luck shocked the NFL last night, announcing his retirement because constant injuries have taken away his love for the game.

Luck, who turns 30 on Sept. 12, had met with Colts owner Jim Irsay earlier to tell him of the decision.

The Colts played their third preseason game last night in Indianapolis against the Chicago Bears. Luck already had been ruled out of the game due to an ankle injury, but he was seen on the sideline, laughing and conversing with teammates.

After the game, Luck announced the retirement decision during an impromptu, 25-minute news conference. He said an official announcement wasn’t planned until this afternoon, but he changed course once news broke during the preseason game.

“I’ve been stuck in this process,” Luck said, stopping several times to gather his emotions. “I haven’t been able to live the life I want to live. It’s taken the joy out of this game … the only way forward for me is to remove myself from football.

“This is not an easy decision. It’s the hardest decision of my life. But it is the right decision for me.”

Luck’s early retirement ends what started as a promising career for the No. 1 overall pick in the 2012 draft, chosen to replace Peyton Manning. Luck led the Colts to the playoffs in each of his first three seasons in the NFL, including back-to-back AFC South titles and the AFC Championship Game in 2014.

But his career took a bad turn when he suffered a shoulder injury in Week 3 of the 2015 season. He ended up missing 26 games — including the entire 2017 season — due to shoulder, kidney and rib injuries. It was during the 2017 season while out that Luck questioned whether he would be able to continue his career.

But Luck returned in a big way last season.