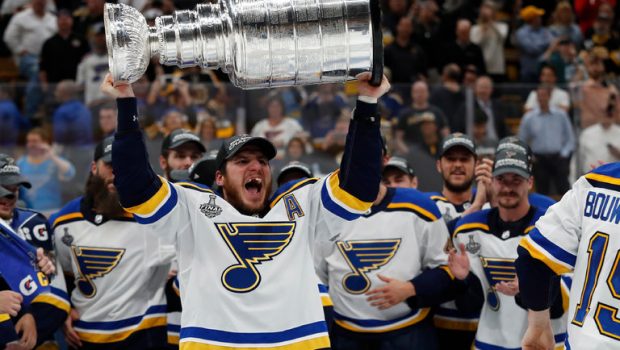 A half-century worth of waiting ended with the St. Louis Blues jumping in anticipation on the bench, unwilling to delay a championship any longer.

With their 4-1 win in Game 7, the Blues are Stanley Cup champions for the first time in their 51-year history.

Center Ryan O’Reilly was named the Conn Smythe Trophy winner as the postseason MVP after he scored eight goals with 14 assists in 26 playoff games. O’Reilly’s first-period deflection made him the first player since Wayne Gretzky in 1985 to score in four straight Stanley Cup finals games. But Binnington was the best player of this Game 7, the first Stanley Cup finals Game 7 since 2011, with 32 saves.

“I couldn’t even sleep the last couple of days,” Binnington said. “Your mind wanders when you get right to that point, planning out your Cup party and then you kind of catch yourself.”

St. Louis can celebrate without abandon now. After players passed around the Stanley Cup on the ice, they did the same with a bottle of rye. Defenseman Colton Parayko found Blues superfan Laila Anderson, an 11-year-old with a life-threatening immune disease, and skated her over to the trophy. Patrick Maroon, the one St. Louis native on the roster who had taken a hometown discount to play for the Blues, held the Cup over his son’s face so he could kiss it.