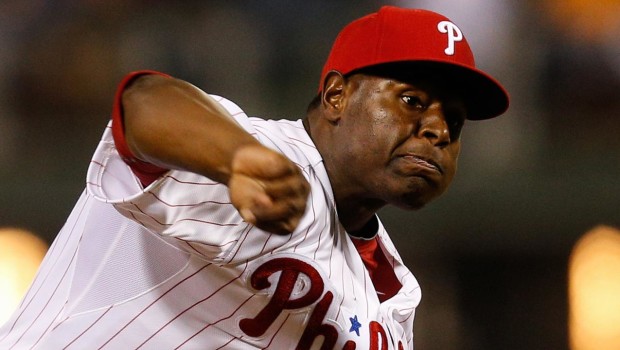 “What a way to lose,” Phils manager Pete Mackanin said. “One thing about Neris is for some reason he’s getting away from his split. He wants to throw more fastballs and that’s not going to work. He’s going to have to get back to that split. Whether he’s not feeling confident with it for some reason or not we have to get him back on track because he’s better than that. That’s one of the reasons I don’t want to name a closer because I don’t want to put a guy in that pressure even though I use him in that situation.”

The Phillies’ season is only 26 days old and already the overarching theme is:

They cannot hold a lead!

The Dodgers’ Justin Turner hit the third consecutive homer off Hector Neris to open the inning and Adrian Gonzalez’s tiebreaking RBI single capped the four-run rally to lift Los Angeles to a wild 6-5 victory over the Phillies last night.

The Dodgers trailed 5-2 before Yasiel Puig and Cody Bellinger — who homered twice — hit the first two homers of the ninth, and Turner’s shot gave them three straight for the first time since Aug. 18, 2012.

With one out, Austin Barnes singled off Neris (0-1). Joely Rodriguez came in and got Andrew Toles to fly out, but Corey Seager singled and Gonzalez drilled a ball off third baseman Maikel Franco’s glove that rolled into left field scoring Barnes with the winning run from second.The Phillies wasted a strong outing by Zach Eflin, who allowed two runs and four hits in seven innings.

“It’s crazy what happened,” Eflin said. “You just have to come back and forget about it. It’s baseball.”

Phils manager Pete Mackanin was disappointed with the outcome.

Toles’ leadoff homer in the first got the lead for Los Angeles, but Brock Stassi connected for a three-run shot in the fourth against Brandon McCarthy. It was Stassi’s second homer of the season.

McCarthy lasted five innings and was charged with four runs and eight hits.

Daniel Nava upped the lead to 4-1 with a two-out RBI single in the fifth that scored Odubel Herrera.

Phils’ shortstop Freddy Galvis extended his hitting to 11 games with a sixth-inning single.

Bellinger, one of the majors’ top prospects, hit his first career homer off Eflin in the seventh. His second homer in the ninth trimmed the lead to 5-4.

“I have never been a part of anything like this before,” Bellinger said. “It was crazy and I’m glad to be a part of it. I’m kind of speechless right now. I don’t even remember what I did.”