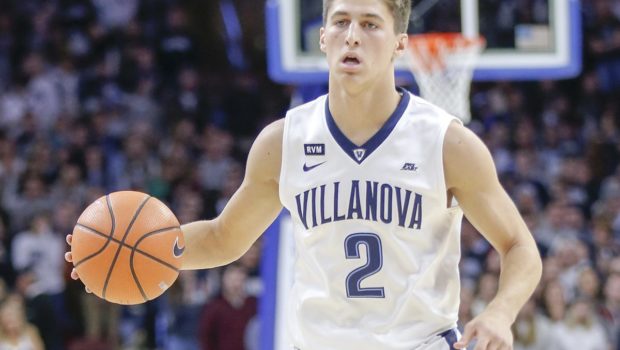 COLIN GILLESPIE STEPS UP IN VILLANOVA’S 98-78 THUMPING OF CREIGHTON!

Mikal Bridges scored 21 points and Jalen Brunson had 19 to lead No. 1 Villanova to its eighth straight win, 98-78.

But it was Colin Gillespie, a freshman from Archbishop Wood, who stole the show for the top Cats.

Gillespie, who had eight points and five assists, missed seven games over five weeks with a broken left hand and played his fifth game since his return. A 6-2 freshman guard, Gillespie has gone from role player to a key player with Phil Booth out indefinitely with a broken bone in his right hand. Gillespie played perhaps his best all-around game of the season and helped the Wildcats build an 18-point lead in the first half.

Coach Jay Wright said he didn’t need to give a pep talk to Gillespie when he returned to the lineup.

Gillespie had two assists early during a 7-0 run. He buried a 3-pointer then took a charge from Marcus Foster on the other end that got the Wildcats rolling. He had an assist on Brunson’s four-point play during a 22-4 run that gave the Wildcats their biggest lead of the half.

“You think you’re there and then they hit you with a spurt,” McDermott said.

Omari Spellman hit four 3s and scored 14 points, Brunson made 4 of 5 3s and Bridges, Eric Paschall and Donte DiVincenzo each made three.

The Wildcats are just waiting for March at this point of the season, and are cruising toward their fifth straight regular-season Big East title and yet another No. 1 or 2 seed in the NCAA Tournament.

Gillespie and Booth have been hurt and forward Jermaine Samuels remains sidelined with a broken left hand. Bridges came up limping on his left ankle early in the second half and took a quick seat on the bench. The Wildcats used only seven players in the first half and depth issues, coupled with any more injuries, could crush their bid for a second national title in three seasons.

Gillespie did his part to spark the Wildcats in 23 solid minutes.

“It doesn’t really change. I have to keep bringing energy,” he said.