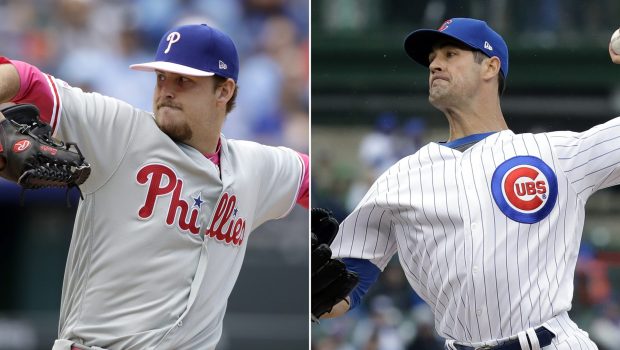 The Phillies hook up with the Cubs again tonight in Wrigley, and there will be a bit of nostalgia on the menu:

Cubs lefty Cole Hamels will face off against his former team for the first time in his career.

The southpaw was a key piece of the Phillies’ 2008 World Series title, going 4-0 with a 1.80 ERA during the team’s title run, and he was the named Most Valuable Player in both the National League Championship Series and the World Series.

The 35-year-old Hamels, who is 4-0 with a 3.13 ERA in nine starts this season, picked up a victory Friday against the Nationals. He went five innings, allowing two runs on seven hits while striking out five batters and walking three.

Hamels will face Phillies southpaw Cole Irvin, making it the first game in MLB history where both starting pitchers have the first name Cole.

Irvin will be starting just his third game in the big leagues. He went six innings, giving up four runs (three earned) en route to his second consecutive victory on Friday. Irvin struck out two Rockies hitters and walked one.

“He doesn’t get rattled very easy,” Phillies manager Gabe Kapler said of Irvin. “One of the things that stands out about Jake is that you can have a very coherent discussion with him in the dugout and he can give you feedback. I see Cole in that mold.”