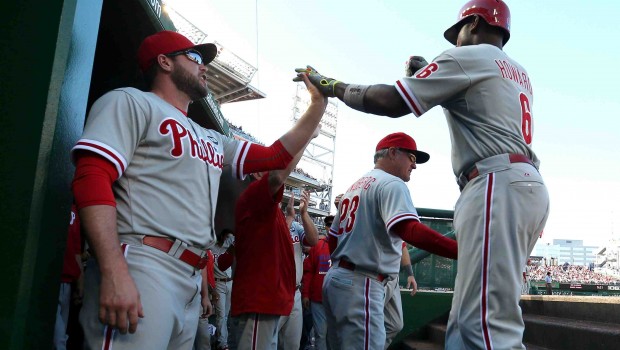 COLE ON A ROLL AS PHILLIES SMOKE NATS 8-1

So much for the much-anticipated Hamels-Strasburg duel on the hill!

Hamels, who had a shutout going until giving up Ian Desmond’s RBI double in the eighth, said, ”They can put up a run, or runs, within seconds.”

Hamels (5-3) won his fourth straight start, and has a 1.53 ERA during that stretch. He gave up one run and five hits, striking out five and walking one.

Hamels hadn’t won four consecutive starts since a five-game run in May 2012. He also snapped his six-game winless streak against the Nationals.

Strasburg (3-5) was chased after 3 2/3 innings. He allowed six runs and seven hits – over his last three starts, he has been tagged for 15 earned runs in 12 innings.

”Yeah, it’s frustrating,” Strasburg said. ”I’m not pitching to my ability, but I’ve got to keep grinding.”

Howard finished with three hits and Maikel Franco had two hits, including a homer, as Philadelphia lost its second straight.

Howard, who had an RBI double in the third inning, is now 10 for 26 (.385) with three homers and five RBIs through six games of Philly’s 10-game trip.

”Just his the way he took the at-bats, his approach, was the vintage Ryan Howard I’ve grown accustomed to seeing, especially that home run that he hit,” Hamels said.

Washington’s Bryce Harper went 0 for 4 and slammed his bat in disgust after striking out in the ninth inning.

The Phillies got to Strasburg for four runs in the third. A one-out double by Cesar Hernandez put runners on second and third. After Chase Utley’s grounder scored Ben Revere, Howard lined a double down the right-field line, sending Hernandez home.

Strasburg quickly got ahead of Franco, but the Phillies’ third baseman hit an 0-2 fastball into the right-center field seats, making it 4-0.

”They did a lot of damage with two strikes,” manager Matt Williams said. ”He had a lot of hitters at two strikes and couldn’t put them away.”

Three Washington errors contributed to Strasburg’s exit in the fourth when the Phillies added two runs.

Howard homered to center off reliever A.J. Cole to open the fifth.