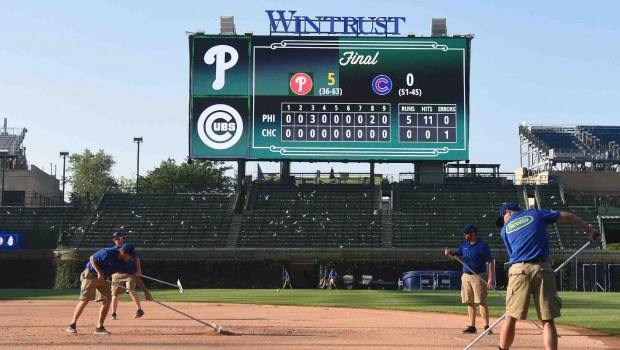 A COLE IN ONE: NO-HITTER IS HAMELS’ FITTING FAREWELL TO PHILLIES No matter how you look at these things, what Cole Hamels accomplished yesterday at old Wrigley Field in Chicago was right out of a fantasy.

A 31-year-old pitcher whose recent awful outings had cooled the trade rumors threw a no-hitter six days before the July 31 trade deadline.

The best pitcher the Phillies have developed in the past half-century — Steve Carlton was traded here in 1972, and he was the best ever — took the mound with a dozen scouts from other teams training their eyeballs and radar guns at him from behind home plate.

Not to mention the Cubs front office watching intently, their talks with the Phillies about trading for Hamels on hold for one memorable afternoon.

He faced 29 hitters Saturday. And gave up no hits. As ESPN’s Jayson Stark pointed out, against the previous 29 hitters he’d faced going into Saturday he’d given up 16 hits.

So how much easier is it for a team to justify trading three or four of its brightest young players for a pitcher who just threw a no-hitter? Hard to say. But I bet we’re about to find out.

Cole Hamels is ready to go. The Phillies need to let him go. So it’s time for them to close this deal in the next six days, after way too many weeks and months of slapping a price tag on his forehead that no one would ever pay.

If they don’t trade him now, that’s an indictment of them — because there’s plenty of interest, from Chavez Ravine in Los Angeles to the North Side of Chicago, from Boston to Arlington, Texas. They have all the elements in place now, because on Saturday, Cole Hamels sure did what he needed to do.

But you can’t sum up the magic of this day without tying in all the other plot lines that made this so amazing.

The Cubs, for instance. The last time the Cubs were no-hit — by Sandy Koufax, on Sept. 9, 1965 — Lyndon Johnson was president. No human had ever set foot on the moon. A gallon of gas cost 31 cents. “Gomer Pyle” was the top-rated comedy on television.

And not only was there not a single active player today who was born back then, but we’re pretty sure the father of Kris Bryant, the man who made the last out Saturday, was in his first week of kindergarten.

It was so long ago that 1,288 different pitchers have won a game against the Cubs since then. Really.

It was so long ago that 130 pitchers have thrown complete-game no-hitters since then — against teams other than the Cubs. Really.

It was so long ago that ESPN Stats and Information’s awesome Kernel Kollector, Doug Kern, tells us that if another 7,920 games go by before the next no-hitter against the Cubs, you won’t be seeing that gem until June of 2064. Really.

So there’s that. The Cubs finally got no-hit. A monumental baseball story unto itself.

But there was one more cool irony to this day, too. And that was the story of Cole Hamels and his catcher.

This was the 207th regular-season game Hamels started with Carlos Ruiz as his starting catcher. The 207th. No other current pitcher-catcher combo has started more games together than they have. Not Adam Wainwright and Yadier Molina. Not Matt Cain and Buster Posey. Nobody.

So what were the odds that, on what was probably the final game they’d ever work together, that the man on the mound would pitch a no-hitter — and the man behind the plate would catch his fourth no-hitter, and join Jason Varitek as the only catchers in history ever to do that?

Carlos Ruiz is just a backup catcher now. Cole Hamels is on his way out the door. But on a breathtaking day at Wrigley Field, the planets would align to let them have one final day of glory together. Really.

So put those trade rumors on ice for a few more minutes … and behold the magic of baseball and the never-ending beauty of sports. The greatest reality show ever. Always ready to furnish us with a script that even Francis Ford Coppola could never top. 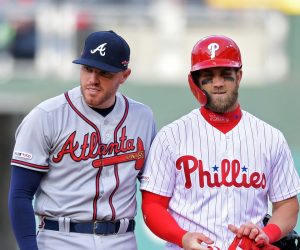 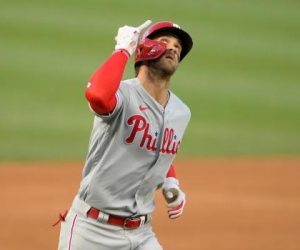