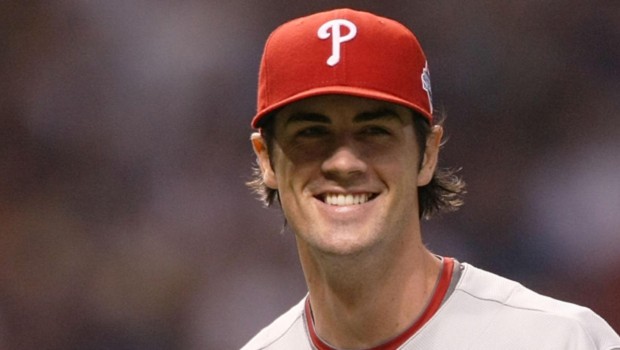 WHY IN THE WORLD HAVEN’T THE PHILLIES TRADED COLE HAMELS YET?

Just because it hasn’t been on the front of your brain pan for about two weeks now, the Phillies’ dilemma over what to do with ace lefty (for now) Cole Hamels just won’t go away.

With Cliff Lee’s season-ending injury throwing the Phils’ pitching rotation into turmoil, now is the time to strike:

Before Hamels gets hurt too!

Here’s what the Boston Herald thinks:

For now, and for as long as the Phillies insist on a price tag of Henry Owens and either Blake Swihart or Mookie Betts in addition to assuming the minimum $96 million remaining on Hamels’ deal, the Red Sox have decided they can live without Hamels and make do with their pear-shaped rotation.

The Hamels-to-the-Red Sox talk makes almost too much sense, which is why it has become the biggest dilemma of the team’s spring.

Is the Red Sox’ reasoning sound for not trading for Hamels already?

Why the Red Sox should not wait much longer to trade for Hamels:

• 1) One can’t assume that injuries will happen, but you can be damn sure that if a Red Sox starter such as Rick Porcello or Clay Buchholz gets hurt, the Red Sox will find themselves in an awful negotiation position. There is more than a wish and a prayer involved in the Red Sox’ belief that their current rotation, with the support of the vastly improved offense, is good enough in the wide-open AL East to warrant standing pat. That plan may indeed work, but if the names of recently shelved pitchers Marcus Stroman, Cliff Lee and Yu Darvish don’t sound a cautionary note as to the fragility of starters, you understand the risk the Red Sox are taking. Yes, they have depth in the minor leagues, but do they really want to hand the keys and all the pressure involved to a green pitcher? The answer’s no.

• 2) With Stroman’s injury a devastating blow to the Blue Jays’ chances this year and Masahiro Tanaka, despite his encouraging early outing, one elbow twinge away from being done for a year-and-a-half with the Yankees, the Red Sox cannot afford to sit on the sidelines. The worst-case scenario would be if any of their AL East rivals were to step up and give the Phillies what they want for Hamels.

At this point, there is no ace of the AL East anymore. The old CC Sabathia is long gone, as are David Price and Jon Lester. Maybe the Rays’ Alex Cobb will mature into that role, but Hamels becomes that ace immediately, and for the next four years as well.

• 3) With Yoan Moncada now in the fold, the Red Sox’ farm system is bursting to the seams with blue-chip talent. It’s an almost historic collection of prospects. Every general manager will tell you that the purpose of grooming prospects is to help your team, but prospects help in two ways: either directly by playing their way onto the big league team or as trade chips to fulfill needs. When the Red Sox dealt two blue-chip prospects — pitcher Casey Kelly and first baseman Anthony Rizzo — to San Diego for Adrian Gonzalez, not many batted an eyelash. Gonzalez was that good, and the need was real. Without comparing where the Red Sox were in 2010 to now, suffice it to say that the time is ripe to deal for a talent of Hamels’ caliber. At some point, the Red Sox have to deal from their surplus. That time is now.

Why the Red Sox can hold off on trading for Hamels:

• 1) The Phillies are in a bigger pickle than the Red Sox, which is why the Sox can afford to wait them out until their price tag drops. With Lee out of the picture, does anyone really believe that the Phillies would hold onto Hamels only to show the fans they are not giving up on 2015? Lord help them if that’s how they feel, but they have to understand the potential injury risks involved in holding onto Hamels for too long. The pressure is on the Phillies to deal Hamels before an injury besets him and thwarts the Phillies’ last best hope.

• 2) With the institution of a second wild card team, it’s easier than ever to make the playoffs. The Red Sox already project as the division favorite, and the fallback of a wild card berth only enhances their postseason chances. Why shoot for the moon now when they can hold their bullets for later? And, just in case this team fails to meet expectations, the Red Sox will be glad they kept their farm system intact for deals yet to be discovered.

• 3) Remember the trades the A’s made for Lester and the Tigers made for Price in the middle of last season and how everybody could not wait for that ALCS matchup between the two? How did that work out? Aces are overrated. The Red Sox can live without Hamels.