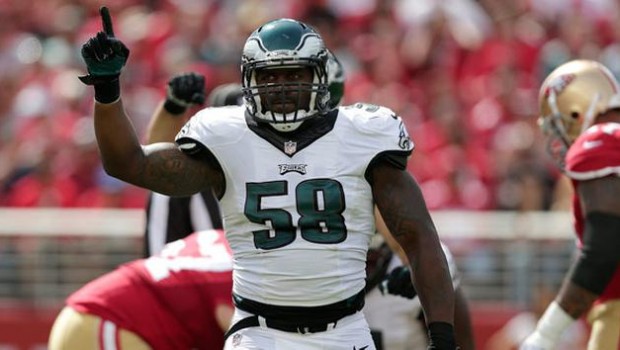 COLE, GRAHAM ARE OUT AS KELLY CLEANS DEFENSIVE HOUSE

As Eagles Nation was absorbing the shock of the Shady McCoy trade, Supreme Leader Chip Kelly’s other moves were going unnoticed.

Fan fave Trent Cole (photo above) will be released, and Brandon Graham will become a free agent and not return as the Eagles continue to diligently turn over the roster.

Cole has 85½ career sacks, which ranks second on the franchise list behind Hall of Famer Reggie White.

Cole, an avid hunter, took to Twitter on Tuesday evening, sending out this message to his followers:

“Taking trip to new hunting grounds that I’ll have chance at a trophy of a lifetime!”

He also tweeted: “Can’t wait for the Auction Block Saturday,” referring to the start of the “tampering” period.

The two-time Pro Bowl pass rusher had said after the season that he’d be willing to redo his contract to preserve his roster spot in hopes that he could retire with the Eagles, but Kelly is turning the roster over and gearing up to reshape the team in his blueprint with younger players who fit the coach’s vision.

Cole’s release will save the Eagles around $8.4 million in 2015, adding to their cap space, which is growing by the day.

Earlier Tuesday, they cut outspoken cornerback Cary Williams and late last week released Todd Herremans. Prior to that, they cut backup tight end James Casey. The moves should leave the Eagles with more than $41 million in cap space for free agency, which begins March 10.