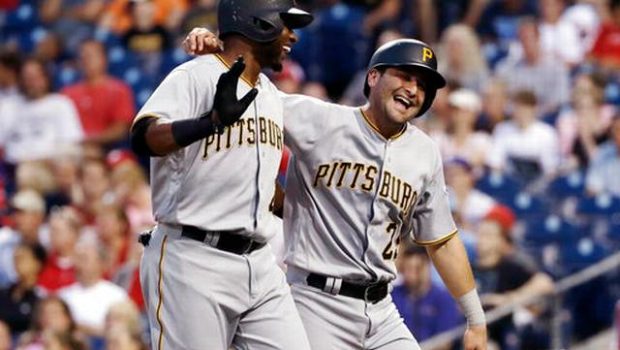 Gerrit Cole pitched six strong innings and stroked a tiebreaking two-run single to lead the Pittsburgh Pirates to a 5-2 victory over the Phillies.

Cole (7-7) rebounded from a poor outing last Friday against San Francisco and a shaky first inning against the Phillies, allowing two runs on seven hits with eight strikeouts and one walk. The right-hander struck out the side in his final inning.

Cole’s big hit came in the Pirates’ four-run fourth inning, when Pittsburgh also got some help from Ben Lively (1-4).

Josh Bell’s triple off the wall in right scored Andrew McCutchen and the Pirates tied the game at 2 on David Freese’s sacrifice fly. Lively looked poised to get out of the inning when he fielded Jordy Mercer’s grounder to the left of the mound, but his throw pulled Tommy Joseph off first base and loaded the bases for Cole.

“I thought he was further down the line than he was and I just rushed it,” Lively said.

Cole followed by lining a single up the middle to score a pair of runs, giving Pittsburgh a 4-2 lead. He had been 3 for 28 this season entering the at-bat.

Maikel Franco homered and Daniel Nava doubled and had three hits for the Phillies.

Franco’s 12th homer of the season, a two-run shot to left field, gave the Phillies a 2-0 lead in the first.

The Phils threatened in the seventh against Daniel Hudson, putting runners on first and third with one out, but outfielder Gregory Polanco ended the inning with a superb throw to the plate from medium right field to nail Nava trying to score from third and complete a 9-2 double play.