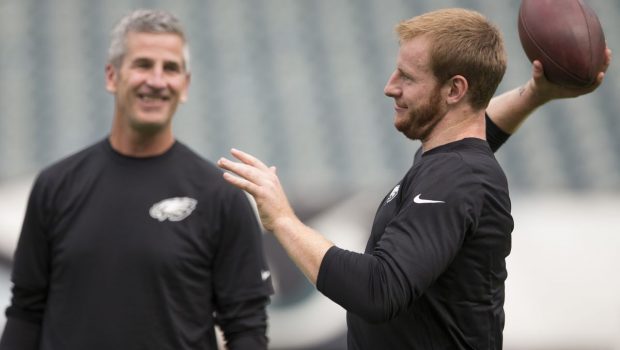 There is still no word from the Eagles or from quarterback Carson Wentz, but…

According to NFL Insider Adam Caplan, Indianapolis Colts head coach Frank Reich believes that Wentz is a player that the Colts “could build around”—should he be acquired in an upcoming trade:

“I’m not backing off of what I said two weeks ago, I still think it’s going to be the Colts,” Caplan said during ‘Ferrall Coast to Coast’ on SportsGrid . “The reason is simply this: Frank Reich had a close working relationship. Reich thinks the world of him.” “He (Reich) explained, I’m told by Colts’ sources that once they got into their free agent meetings, this is a guy they could build around.”

The 28 year old Wentz is still theoretically talented. He has the draft pedigree as the 2nd overall pick of the 2016 NFL Draft, as well as an NFL MVP caliber season in 2017 to fall back upon—when he threw for 33 touchdowns to 7 interceptions during 13 starts on an 11-2 Eagles team before unfortunately suffering a season-ending torn ACL injury.

He’s still shown flashes of that talent too from time-to time.

Playing style wise, he has a bazooka and is the type of dual-threat quarterback that can make plays with both his arm and feet—featuring the ability to make plays under duress (frequently throwing on the move) and utilizing escapability passing outside the pocket.

However, there’s no sugar-coating it. Wentz was downright dreadful this past season. He threw for 16 touchdowns to 15 interceptions in 12 starts before being benched down the stretch in favor of rookie quarterback Jalen Hurts. There were also rumored issues of his coachability and accountability as a Birds quarterback this past season.

Make no mistake though, Wentz is a dynamic quarterback—when actually going right, that could potentially transform into an NFL franchise quarterback again—and a star passer the Colts could build around on offense. However, there’s some developed bad habits to fix—in fact, quite a lot of them, so there’s no guarantee of anything.

That being said, Reich knows Wentz—having been his former Eagles offensive coordinator from 2016-2017, the latter year which was also Wentz’s best career NFL season. The two have already developed great rapport and a positive working relationship together. The Colts head coach knows what makes Wentz ‘truly tick’ and as a former NFL quarterback himself, he might be able to bring out the 2017 NFL All-Pro’s best better than almost anyone.

There’s a lot of familiarity and a comfort zone between both sides—making it a logical fit.

Still, not without risk.

Wentz essentially has ‘an easy out’ from his mega-contract after two years, but there would still be high cap hits for the Colts during each of those seasons—which would only be exacerbated if he continues to struggle.

While Wentz’s ceiling is very high, his floor (as we saw firsthand last season) remains quite low.

There’s also the entire issue of draft compensation, as the Colts—and any other trade suitor for that matter, appear to be refusing to surrender a first round pick at this juncture.

Getting past that though, there are limited upgraded starting caliber veteran quarterback options for the Colts that are readily available this offseason. Wentz might arguably be the best remaining option reasonably out there.

If the Colts (and especially Reich) truly think Wentz is salvageable and can regain his prior MVP caliber form (*or even close to it*), the risk could very well be worth the reward for Indianapolis—and much more, as a potential franchise cornerstone.