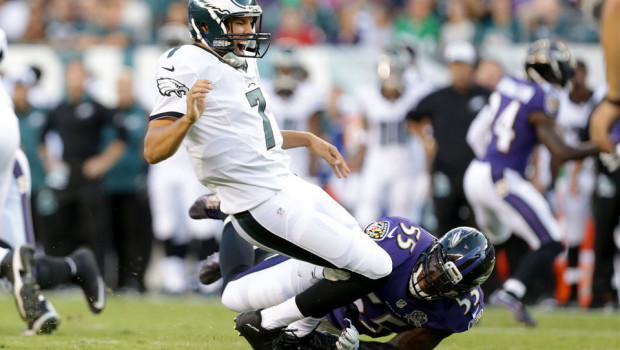 The past year and a half has been like a plague in the NFL.

Commish Roger Goodell has screwed up the Ray Rice affair and Deflategate, which eight months after it occurred, is still in th enews!

Appeared on NFL Network this morning and said of Suggs’s hit, “It’s not a foul.”

The referee called roughing the passer on the play, but Blandino said the ref was mistaken and that he plans to communicate with all of the league’s officials this week to make sure they understand that quarterbacks are to be treated as runners unless they are clearly in a passing posture or clearly don’t have the ball.

“If the quarterback has an option, he’s considered a runner until he either clearly doesn’t have the football or he re-establishes himself as a passer,” Blandino said. “So it’s not a foul by rule. It’s something that we’ll make sure that we cover with our game officials because the defensive end coming off the edge, he doesn’t know if the quarterback is going to keep it, he doesn’t know if he’s going to take off and run or drop back and so we treat the quarterback in that instance as a runner until he clearly re-establishes as a passer or until he clearly doesn’t have the football.”

Blandino’s comments are vindication for Suggs, who said after the game that he had done nothing wrong. The Eagles may think Suggs is a dirty player, but the hit was a legal play.